•Noti Flow and King Alami had earlier broken up after the rapper accused her bae of being physically abusive.

•Noti Flow was in the past dating fellow rapper Colonel Mustapha.

Natalie Florence alias Noti Flow wants to get back with her ex-girlfriend King Alami.

This is after the two recently broke up over allegations that Alami is an escort (An escort is a woman who escorts clients to events by posing as their partners or their date.)

Noti Flow posted a message from King Alami stating that she misses Noti Flow and that she would like to get back together.

"Waking up to this my poor baby barely slept, maybe we should just move in back together". 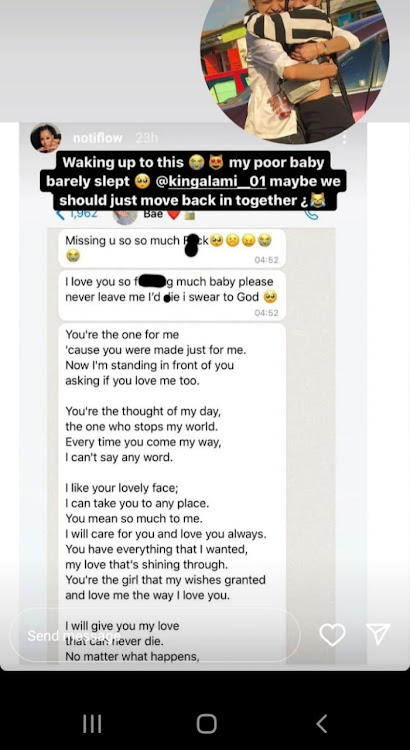 Rapper Noti Flow had earlier taken to social media to blast her girlfriend, Alami, after she came across her photos on escort sites.

Noti alleged that King Alami is secretly hawking her flesh on the sites and shared screenshots to prove her claims.

The rapper had earlier confronted Alami after finding her profile on a popular escort site and when she questioned her, she begged for forgiveness and deleted the profile.

During an interactive QnA session on Instagram when one of her adoring followers wanted to know how the two were fairing.

An agitated Noti Flow responded, “How are you and King Alami? I love you guys so much. Greet her,” the fan asked.

In her response, Noti Flow said, “You are gonna have to greet her yourself because I broke up with her.”

She went on to add, “Rumors were going around that she is an escort. I confronted her but she denied it.

So last night she told me she was going to her cousin’s birthday party in Westy. I felt she was lying and decided to follow her on the low and yeah, she went to Runda instead.

Some big houses. Some old baba opened the gate for her, they hugged and kissed,” she wrote.

When Mpasho reached out to King Alami to respond to the allegations she responded, "No comment."

This was not the first time the couple had broken up. They had in the past broken up after Noti Flow alleged that Kalami was violent.

Noti Flow and King Alami back together again

Noti Flow and King Alami shared pictures of themselves having nice meals.
Entertainment
1 month ago

Why do people get tattoos of celebs on their bodies?

Noti Flow described her ex-girlfriend, King Alami as a psycho and a 'headache' that she still loves.
Entertainment
1 month ago
WATCH: For the latest videos on entertainment stories