Mungai Eve-Guys hate Trevor cause he has me

Mungai Eve believes people hate her man because they are dating

• Mungai Eve says Kenyans hate Trevor because they are dating and 'doing well'.

• Defending her man, Eve described Trevor as the kindest person she knows. 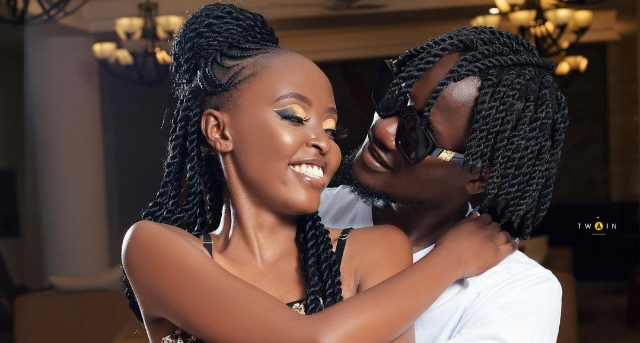 Popular YouTuber Mungai Eve claims that people hate on her boyfriend Trevor online because the two are dating.

Eve was speaking on Jalang'o TV after the media personality asked why netizens think Eve's boyfriend, Trevor is an arrogant man.

Before she could even defend her man, Jalang'o turned the camera on Trevor who said he doesn't understand where the notion came from.

"I am not arrogant, online guys seem to have their own issues. If I appear on camera they'll have an issue and the same thing happens when I am behind the camera so what do I do?" he said.

Defending her man, Eve described Trevor as the kindest person she knows.

"I am not saying I am not kind but Trevor is much kinder. " She said. Adding, Trevor is so kind personally my character me I don't entertain so many things I am normally a no-nonsense but him he is always there always listening so I don't think so Trevor hana kiburi."

Jalang'o asked why Eve thinks that many people hate Trevor? She confidently answered that it was probably because he was dating her.

"They hate Trevor 'cause probably he has me and we are doing well. You know having this beauty and the brains," she said amid a loud sarcastic laugh.

She went ahead to say that she thinks it is human nature for people to think men shouldn't support their women.

Eve says she is hopeful once Martha Karua is elected as the next Vice President then the mentality will disappear.

The content creator also addressed pregnancy rumors saying she is not expectant but would eventually want to have kids of her own, when they are both ready.

"I think pregnancy is something you have to be ready psychologically and also financially. I don't know why people feel the urge to ask women about pregnancy," she said.

I was going through a lot - Matubia denies conning designer

Jackie Matubia defended herself saying, she received a lot of hate at that time so she could not post anything.
Entertainment
1 month ago

Evelyn Wanjiru says she got jealous because her friends stopped inviting her to baby showers.
Entertainment
1 month ago