• For many months, Akothee and Nelly Oaks had excited Kenyans with their budding romance with many thinking they would get married.

• This week, Akothee has made some interesting revelations about her relationship with Nelly. Akothee with Nelly Oaks in the past
Image: Instagram

The past week has been one of highs and lows for popular singer, Esther Akoth commonly-known by Kenyans as Akothee.

The mother of five started out the week by launching her own book, an event that was well-attended by her celeb friends.

But sadly a few days Kenyans got the terrible news that she and her on/off-again boyfriend, Nelly Oaks, had gone their separate ways, something the singer confirmed on social media.

Yesterday night Akothee made a post on her Instastories that raised a lot of eyebrows among her fans and followers.

She stated that every year that she was in a relationship she had always ended up going to a hospital. 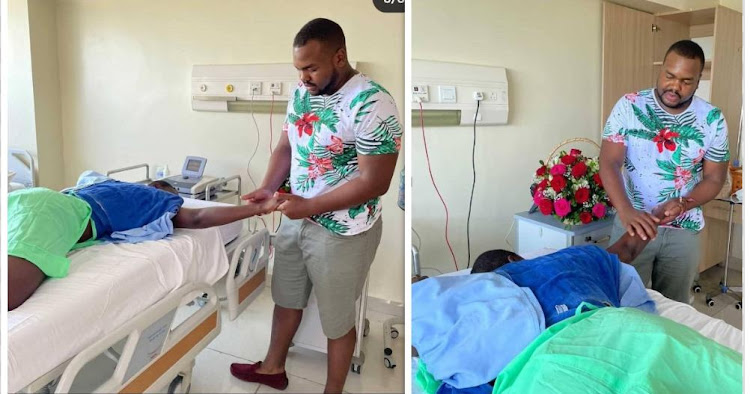 But the one year she hadn't been in a relationship, she noted had been very healthy, not even having to take a Panadol.

But when she decided to enter a relationship last year and within a few months, she was back in hospital.

"Back into the relationship again in June 2021. 3 months down the line, admitted," she wrote.

But that still wasn't the most surprising part of her confession. The Rollam singer said she had then gotten depression.

"Succumbed to depression for over six months. I can do it again," she promised herself.

Read her message below; 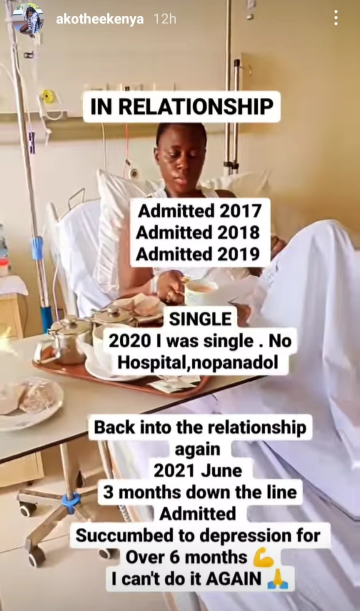 Her admission will come as a bombshell to many Kenyans who eagerly follow Esther who is someone who is normally always boisterous, with nary a worry in her life.

It also adds some context to a message she wrote on Friday where she warned Kenyans about the false veneer of celebrity relationships.

"When you decide to date inside celebrities, get ready for a roller coaster of emotions. Do you my dear, those smiles on cameras, might not be found off cameras, people are struggling with life, people are handling ugly things in so-called relationships," she cautioned.

I hope she and Nelly fully heal from whatever happened in their relationship.

"I have walked out of other relationships with different ups and downs, so this last one shouldn't be a shock or a surprise. It's just a personal ...
Entertainment
7 months ago

Sarah Kabu - "Even if we are saying we are in the government of marriage as goat wives, every goat wife is a potential single mother."
Exclusives
7 months ago

Akothee says men should learn to provide no matter how small.
Entertainment
7 months ago
WATCH: For the latest videos on entertainment stories