Hamisa Mobetto exposes her exes for wanting to rekindle their love

•Hamisa Mobetto is rumoured to be currently dating Rick Ross.

•Hamisa has a son with Diamond Platnumz and a daughter with Majizzo. 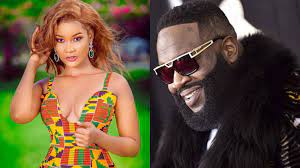 Hamisa Mobetto says her exes should have tried and made things work instead of following her around after the breakup.

The mother of two was in the past dating Diamond Platnumz whom she has a son and Majizzo whom she shares a daughter.

Speaking during an interview with a Tanzania radio station, Hamisa says she doesn't know whether to be happy or sad now that her exes want her back.

"They are just regretting. And also some come back to see whether you are still stupid or not." My exes really bother me. It's not something to brag about cause it's not nice. "

Mobetto added that if they really wanted her, they would have stayed and made it work

"If it was something nice, we would still be together. There is no woman who loves getting from one relationship to the other. We were together and broke up because things couldn't work, there's no point of going back together. "

If you want to rekindle our relationship, there are things I will look at, to know whether you have changed."

Although Mobetto has no history of getting back with her exes, she said a man that has compassion warms her heart.

"I like a guy who is companionate. We are not perfect but I believe if you hurt someone, you need to acknowledge that you did something wrong. You have to realize your mistake, don't wait until I have moved on for you to realize when it is too late."

She is currently rumoured to be dating American rapper Rick Ross.

The two had previously denied dating but by the look of things, they might be more than friends.

Hamisa said people posts what they want their fans to see online.
Entertainment
4 months ago

Mama Mobetto says she sees no problem in getting married to a yiounger man.
Entertainment
4 months ago

Hamisa-The least marriage proposal I have received was 10 million

Hamisa has revealed that she will not get married until she is financially stable
Entertainment
4 months ago
WATCH: For the latest videos on entertainment stories