•  Pastor Omba lays the blame of his failed marriage on Gloria Muliro's doorstep. "Even the Bible says that a foolish woman breaks her own marriage with her own hands." 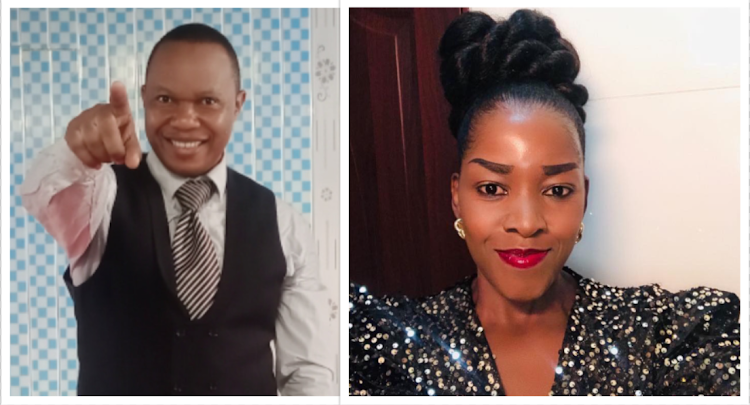 Prophet Eric Omba and ex-husband to Gloria Muliro has opened up about his turbulent relationship, marriage and eventual divorce with the gospel star.

Omba was on NTV last night where he told Lofy Matambo that he was more than willing to reconcile with Gloria but evil forces would not let him prosper.

"Reconciling with Gloria Muliro was very possible but there were some spiritual issues and altars that prevented that. You may find that the father may have been a person who left the wife and they divorced so you see that curse follows some of the children.

You have seen situations where for example, a father was a thief and you find the children also end up being thungs like their father," Omba said.

Adding, "Hence, the example that the parents set for the children was bad thus blocking blessings, so there is a possibility that in our situation with Gloria Muliro, I was willing to appologise and seek out a reconciliation but her family altars and generational curses could not allow her to stay in one marriage, you will have to go to another one."

Gloria remarried a few months ago and so did Omba who also has children with his new wife.

Asked why he thinks the altars and curses are the reasons for the divorce yet Gloria is a gospel artiste and minister of note. Why did she not break the curses?

Omba defended his theory saying, "Let me tell you, the Bible says, if you accept with your mouth and decree it, and ask God to deliver you from the curses and demons you will be free. If you do not disconnect yourself from those demons, they will not go anywhere and thus your pastor cannot help you get rid of them and God cannot also free you either."

He was taken to task being asked why he did not stand in the gap and pray for her to losen the grip of the curse and the evil powers that were destroying his marriage.

Omba explained, "This is what I'm saying, as a couple we needed to both accept that we have baggage and demons. I have to agree that yes, I also had baggage and demons as well, that is a given. But at the end of the day, the two of us had to agree and work at it. But my partner did not accept. I accepted my wrong doing."

Omba who is a pastor at a local church said that women nowadays do not want to submit to their husbands.

"But women have an issue, the Bible says, Husbands love your wife and wife , submit to your husband, but women nowadays  there is nowhere you can take her, even the government says, everything is 50:50,  they have pride, you tell her one thing she shoots back with 100 others.

When you ask her to bring food for you she tells you, to go serve yourself in the kitchen. Then you realise you cannot live with someone who doesn't submit, that is why they leave. When they leave now they start fighting you proper when they are out there. They start asking for money. Even the Bible says that a foolish woman breaks her own marriage with her own hands."

Omba claims that his marriage failed purely because there was no submission from his ex-wife.

"Women nowadays get into marriage and they don't understand their position in the union. they get into to family unit and act like men who want to rule. God has made me the head of the family, now you want to take over and make me the neck, we will end up looking like 'majini'."

Gloria is yet to comment on these allegations. She is currently based in the US with her new husband Evans Sabwami.

Recently, she spoke up about physical abuse in marriage after the death of gospel star Osinachi.

She advised ladies to walk away from abusive marriages just like she did walk out on her marriage with Pastor Eric Omba years ago.

Gloria added that she is now living happily with her husband and is loved.

"My heart bleeds for this soul. Minister Osinachi, Rest. Ladies! Men! What if the shame of “what will they say…” is your healing in disguise? listen, is your life at risk? DON'T WAIT TO DIE! Thank God I’m alive, happy and loved," Gloria shared.

Other than the physical abuse, Gloria had also accused Omba of being unfaithful, something he denied vehemently.

Emmy Kosgei said, "God waits until the cup of your enemies is full... thank you JESUS, bless this union!"
Lifestyle
11 months ago
WATCH: For the latest videos on entertainment stories