Tyler Mbaya: I wish I can breastfeed my baby!

Former Machachari child star says he is attached to his newborn.

• Tyler and Georgina revealed that the baby is named Astra.

• Tyler is super attached to the baby and he offers Kangaroo care. This is a method of holding a baby that involves skin-to-skin contact. Mostly the baby is typically naked except for a diaper. 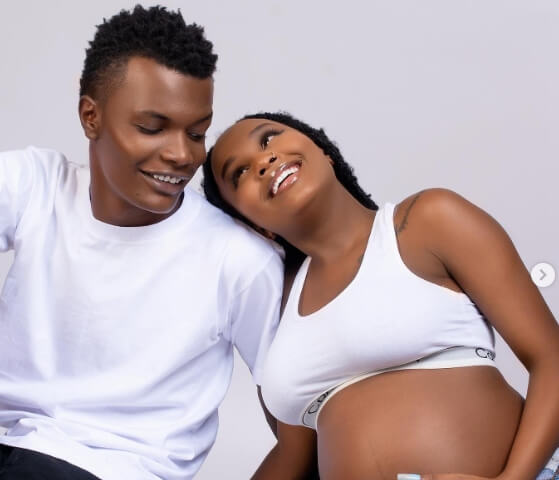 It has been 18 days since Tyler Mbaya and his girlfriend, Georgina Njenga welcomed their firstborn and the actor is still over the moon as he experiences fatherhood.

The former Machachari actor has been sharing photos and videos of his young family and he says seeing his girls always gets him weak.

In one of the videos showing his lover sleeping next to their baby, Mbaya wrote, "18 days and kicking with my girls. Seeing them both sound asleep still gets me weak."

Expressing how it feels to be a father for the first time, the young king wrote, "What a feeling..nothing can beat."

Georgina and her daughter were released from the hospital a week ago just days after welcoming her into the world.

Both Tyler and Georgina were featured on Diana Marua's YouTube channel and they had a very candid conversation about their new journey.

Tyler revealed that he has been so attached to the baby and even wishes he could breastfeed her himself.

"I actually feel jealous I can't breastfeed her I was so excited and the fact that I was told that I can Kangaroo her as a dad because I thought only mothers can do that," Tyler said amid laughter.

Offering Kangaroo care to a baby is a method of holding a baby that involves skin-to-skin contact. Mostly the baby is typically naked except for a diaper.

Tyler praised his lover for how she handled herself through out the entire journey and during birth saying that seeing her giving birth confirmed to him the pain that his mother went through.

The couple revealed that the baby is named Astra, a name that Georgina came up with. They added that they settled on the name just before the baby came.

Machachari actor Tyler Mbaya and his girlfriend Georgina welcomed their first child on May 7th. The baby girl was welcomed on Baha's birthday.
Lifestyle
3 months ago

Tyler Mbaya and his girlfriend Georgina welcome their first child