• The fan was captured spitting on Kenyan footballer, Joseph Okumu during the match.
• The Harambee stars defender plays for Belgium side, Genk. 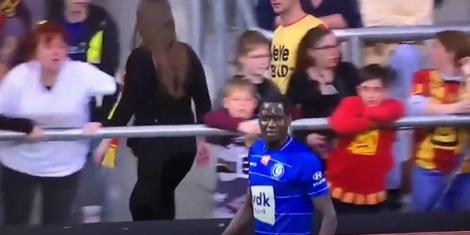 Joseph Okumu was subjected to racism when a White Woman was caught on camera spiting on him
Image: courtesy

A video of a white woman spitting on Kenyan international defender, Joseph Okumu has spread like wildfire on social media, angering Kenyans on Twitter.

The video shows the woman, who is believed to be a rival fan spitting on Okumu who was walking on the sidelines of the pitch.

Most Kenyans have interpreted the incident as a pure act of racism in a nation whose authorities register between 800 and 1,400 cases of racism and xenophobia, every year.

Okumu plays for Belgium side, Genk.

The incident happened on Tuesday night during his team's 2-1 win over Mechelen.

'Disgusting night in Belgium as a fan spits on Harambee Stars defender Joseph Okumu during Gent's 2-1 win over Mechelen on Tuesday night. Okumu who started the match on the bench was introduced in the 67th minute of the game," Pepeta tweeted.

Kenyans who were angered by the unknown woman's actions used the same medium to report the incident to various accounts, including tagging Okumu's football club who were swift to respond.

According to Genk, their opponents from the Tuesday night match (Mechelen), took immediate action and are planning to take 'all necessary measures' once they identify the perpetrator.

"Hi guys, just to inform you that our opponent of yesterday's game (@kvmechelen) took immediate action after the game, are actively looking for that person and will take all necessary measures after identification. As they rightly said: this kind of behaviour has no place in football. Not in their stadium, nor anywhere else," Genk wrote in a tweet.

Below are some of the actions from KOT who were left with a bad taste in their mouths upon learning of the incidence.

Jeff  Kinyanjui: Disgusting. Racism has no place in football. I hope that lady is identified and suffers the consequences

Omosae: Spitting on someone because of racism is unacceptable

Derrick Odero: Racism has no place in football. This is disgusting and disrespectful

Theuri: This is heartbreaking bana

We hope the lady will be found and all the necessary and tough measures taken against her as the world fight to kick racism out of the beautiful sport.

DJ Shinki relocated to the US after high school.
Exclusives
3 months ago