'I will always love you,' Ben Cyco mourns sister two years on

It is two years since Ben Cyco's sister, Joy Wairuri passed on

• Joy died In 2020 after battling cancer and had made her health struggles public via social media. 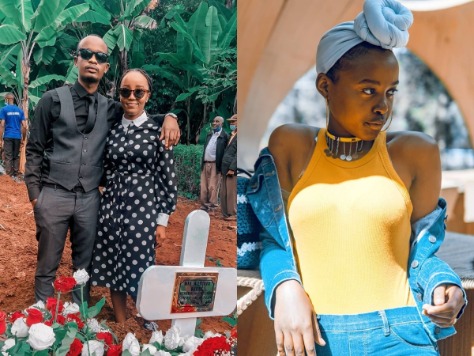 Ben Cyco with his wife Wanjiru Njiru during his sister's burial
Image: Instagram

It has been two heartbreaking years for Ben Cyco and his family following the death of his sister, Joy Wairuri.

Joy died In 2020 after battling cancer and had made her health struggles public via social media.

To mark this sad day, Ben penned an emotional message to celebrate a life well-lived.

It’s 2 years today since you left us, continue resting my sister I’ll always love and remember you @_fu.raha_ , always

Recently, Ben Cyco and his wife shared about Joy's death on their podcast, JoyRide where they tackled how the grief affected their 11-year relationship.

"I just saw how her sickness affected you in those two years she was sick. In those two years, I had seen how you were not able to help her and the strain that had on your family. At that time I felt if something like death happened me and you wouldn't survive."

The lovely Wanjiru said that how Ben handled himself after Joy's death shocked her with Ben attributing it to God's grace.

"I thought the grief would crash you and that you would become a shell of yourself. How I thought you would react and how you reacted is very different."

In one of their podcasts the couple revealed that some of their friends were against their relationship but they have since learnt to accept that, it is a personal choice. They had to catch up with the person he chose and not for him to match up to their standards.

But why the name Joyride? We just wanted a name that would reflect the journey that we are on and having people just join that journey.

They say on their podcast they tend to have conversations that most people run away from where they tend to learn from their audience and vice versa.

The celebrity couple says among the challenges they have faced since they began podcasting include negative feedback.

Ben says there are people who get threatened by Wanjiru's strong personality and in return 'tend to come to our platform to bust out.' But that doesn't affect him at all.

Ben's friends were against their relationship
Entertainment
1 month ago

Ben Cyco-Church friends were against me marrying Wanjiru

The two tied the knot on Saturday, November 27, 2021.
Entertainment
2 months ago