Since the Ukraine war began, there have been calls for Alina Kabaeva to face sanctions

• She moved into politics, holding a seat in Russia's lower house of parliament from 2007-2014 with the ruling United Russia party.

• In 2014 she became chair of the National Media Group, which has large stakes in almost all major Russian state media outlets. 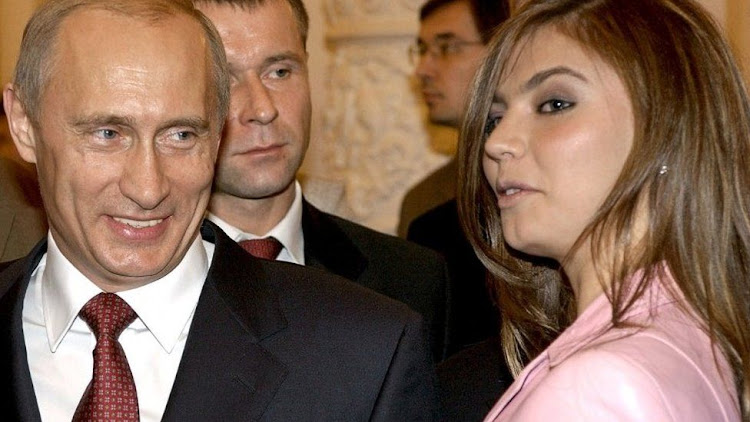 Russia is already under unprecedented sanctions and now the EU could target Alina Kabaeva, a politician, media boss, former Olympic gymnast, and - if the rumours are true - Vladimir Putin's girlfriend and mother to some of his children.

The sanctions imposed by the EU and others are designed to punish those closest to Mr Putin - the oligarchs, politicians and other officials said to have benefited from their proximity to the president.

Last month, the US and UK imposed sanctions on his daughters Maria Vorontsova, 36, and Katerina Tikhonova, 35. They are his children with ex-wife Lyudmila.

Until now, Ms Kabaeva has escaped, despite her reported status. She might have felt something was coming: an online petition in March demanded her expulsion from her residence in Switzerland.

Sources have confirmed to the BBC that she is on the latest list of individuals to be sanctioned by the EU. According to AFP, she will be targeted for her part in disseminating Kremlin propaganda and for being "closely associated" with the 69-year-old President Putin. The draft document does not name her as his partner, and the EU is yet to officially sign off on the proposal.

Russia's leader has always been intensely private. When asked about his private life, he has tended to brush off the question.

He has, though, explicitly denied a relationship with Ms Kabaeva.

In 2008, the Moskovsky Korrespondent newspaper reported that he was planning to divorce his wife Lyudmila and marry Ms Kabaeva. Both rejected the story. Soon after, the authorities shut the newspaper down. Mr Putin and Lyudmila would announce their split five years later.

At the time the Russian president was denying he was involved with Ms Kabaeva, she was transitioning from a successful sporting career to one in politics.

Her chosen discipline was rhythmic gymnastics, where competitors perform routines with the aid of equipment like ribbons and balls.

Ms Kabaeva, at her peak, has claims to have been the best in the world. She had a move named after her and was a leading performer in the team that dominated the sport. Russia won every Olympic gold medal available from 2000-2016.

Born in 1983, she started rhythmic gymnastics as a four-year-old. Her coach, Irina Viner, said: "I could not believe my eyes, when I first saw her. The girl has the rare combination of two qualities crucial in rhythmic gymnastics - flexibility and agility."

Ms Kabaeva would become known as "Russia's most flexible woman".

She made her international debut in 1996, and was a surprise winner at the 1998 European Championships.

At the 2000 Sydney Olympics, an uncharacteristic error with the hoop cost her dearly (she let it roll off the floor) and she could only manage bronze in the all-round event. Four years later, in Athens, she went better, taking home gold.

By the time of her retirement, she had won 18 World Championship medals and 25 European Championship medals on top of her Olympic prizes. Like other Russian athletes, she has not escaped the taint of doping, losing her medals at an event in 2001 after testing positive for a banned substance.

She moved into politics, holding a seat in Russia's lower house of parliament from 2007-2014 with the ruling United Russia party.

In 2014 she became chair of the National Media Group, which has large stakes in almost all major Russian state media outlets.

Such outlets have been pumping out a relentlessly pro-Kremlin message on the war in Ukraine, accusing Ukrainians of shelling their own cities and presenting Russian troops as liberators.

Her position has reportedly made her a wealthy woman, with leaked documents suggesting she earns about $12m (£9.7m) a year.

It is not known when she and Mr Putin first met, but it is not unusual for a leading Olympian to meet a country's president. There's a photo of the pair as far back as in 2001, when Mr Putin awarded her an Order of Friendship - a top state honour.

There are rumours that they have children together, although reports vary on how many.

A Swiss newspaper reported that Ms Kabaeva had a boy in 2015 at an exclusive clinic near Lake Lugano, and another boy at the same place in 2019. But The Sunday Times and Wall Street Journal said she had twins in 2019 in Moscow although they disagree on how many children she has had.

The Kremlin denies such reports. Back in 2015, Mr Putin's spokesman said "information about the birth of a baby fathered by Vladimir Putin does not correspond to reality".

Such is Mr Putin's guarded nature - in public, he's never mentioned the names of the children he has with Lyudmila, other than to say he has two adult daughters - that the speculation is likely to continue.

Ms Kabaeva has been in and out of the spotlight since reports of her relationship with Mr Putin emerged.

There was a Vogue cover in 2011, where she wore a pricey gold dress from French fashion house Balmain. She was also a torch bearer at the 2014 Winter Olympics in Sochi.

More recently, in April she appeared at a junior gymnastics festival in Moscow, quashing suggestions she was in hiding. There, she praised Russia's war effort. Some outlets noted she wore a wedding band.

Since the Ukraine war began, there have been calls for her to face sanctions.

The Wall Street Journal has suggested that the US is reluctant to sanction Ms Kabaeva, for fear it may be deemed "so personal a blow" to Mr Putin that it may escalate tensions further.

It might not be off the table altogether, though. When the White House was asked in April why she was not on their latest list, the press secretary replied "no-one is safe".

What happens behind the closed doors on Putin?
Exclusives
1 month ago

"My daughters live in Russia and studied only in Russia, I am proud of them," Putin said. "They speak three foreign languages fluently. I never ...
Politics
1 month ago
WATCH: For the latest videos on entertainment stories