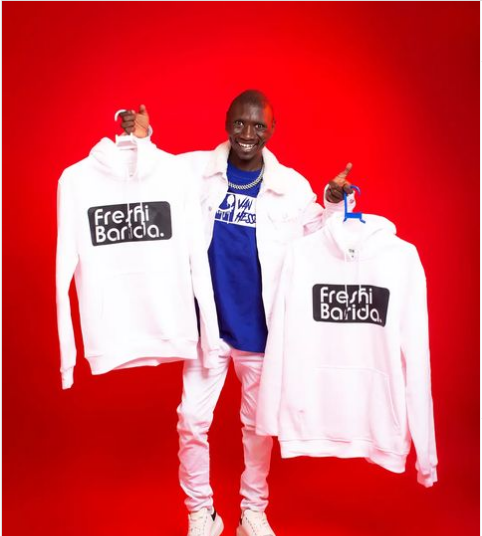 It is a winning season for the popular musician, Stephen Atieno Odera, alias Stivo Simple boy who has added a new product to his freshly launched 'Freshi barida' clothline.

The 'Tuheshimu Ndoa' artist launched his brand new line a few weeks back and has enjoyed instant success with his fans and peers all joining the bandwagon and supporting his new hustle.

The clothing line name is derived from his now popular 'Freshi Barida' phrase. A phrase that looks set to replace 'Au sio' and 'ndio manake' slogans which were also coined by the Kibera based budding artist.

This will be the second time Simple boy is venturing into the business after selling merchandise which had his name, pictures of his face and others branded with his slogans Ausio and Ndio Manake.

Introducing the fresh merchandise to his adoring fans, Simple boy said the brand new merchandise will come in high quality and normal quality hoodies, which he will be selling at Ksh 2,500 and Ksh 2,000 respectively while T-shirts will cost you just Ksh 1,000.

Today, Simple Boy has revealed that he has expanded his portfolio and now will be selling 'Freshi barida' boxers!

Check out some of the reactions from his fans who were full of praise for the business minded artist.

Anyone who wants to promote the 'Mihadarati' crooner will need to contact his sales manager via 0701210698.

"Three days ago you were busy eyeing DJ Kalonje's girlfriend, please do not do this to Stivo." - Kamene Goro
Entertainment
1 month ago

He also stated that there will be no delivery fee and that payment was to be done once you receive your item.
Entertainment
1 month ago