• Bahati asked for Mueni to spend time in his house, only for her to see photos of her daughter online without her consent.

• Diana apologised for posting Mueni's photo on her social media without the consent of  Yvette. 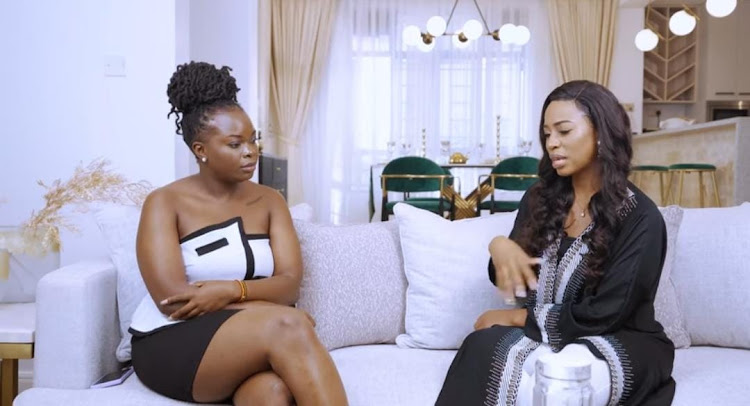 Bahati's baby Mama Yvette Obura has said that Bahati did not show her the DNA results for their daughter Mueni.

In a conversation with Diana Marua, Yvette said she knew there was a DNA test going to be done but as the mother, no results were shown to her.

After moving in with Diana Marua, one day Bahati requested that Mueni spends the night at his house only for her to see photos of her daughter online without her consent.

Yvette's beef with Diana started as she felt disrespected.

Diana apologised for posting Mueni's photo on her social media without the consent of  Yvette.

"I didn't realize until later. This is what happened, after moving in with Bahati, he wanted to do a DNA of the baby and it was a bit an issue.

"I had never seen the baby although I knew there was a child somewhere. I was like okay, one day Mueni came home and when I saw her, I told him, this is your child but if the DNA will make you okay, then go ahead," Diana said.

Bahati went ahead and conducted a secret DNA test to ascertain if Mueni was indeed his Biological daughter and to his shock, it turned out to be positive.

"He later did a photoshoot and I saw Diana post my daughter, Bahati his friends. I felt disrespected as the mother. I am an introvert, I don't talk much but my friends and my friends talked on my behalf," Yvette said.

Yvette added that they had previously agreed on the baby not being on social media.

"I am trying to explain to Bahati and he is like this (Diana) is going to be Mueni's mum. I didn't have an access to him since after that he blocked me and I didn't even know you (Diana) in person," she said

Diana defended herself saying she had the innocent photo of her and Mueni and Bahati asked her to post it only to wake up trending.

"The first few comments were okay and I slept. I woke up trending, bullied and insulted. It was bad and I told Bahati this is how I felt. I cried about it. I did not have anything to say," Diana said.

"A friend told me 'Hapo umechoma' she told me I should have asked the mum. The best thing I should have done was to delete the photo but Bahati refused.

Diana said life after that was not smooth but they have since worked on co-parenting.

Yvette narrated how Diana has made co-parenting easy for her and Bahati.
Exclusives
10 months ago