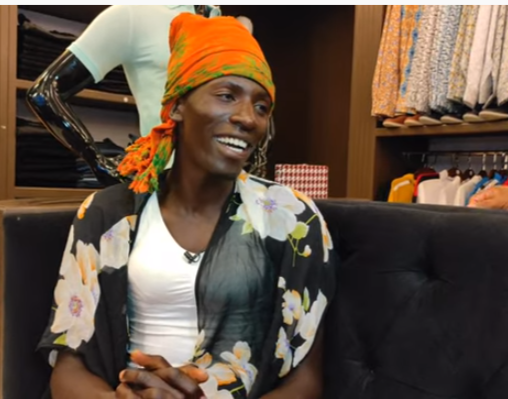 Sande Mayua aka Mtumba Man as he is popularly known went on Instagram live to engage in a Q and A with his fans.

In the video, Mayua went ahead to refute dating allegations that had sprouted up. He told his curious fans that he was most certainly not romantically involved with Tiktok cross-dresser official Kinuthia.

He said they had a cordial relationship and that they were both working on a project.

Mayua claimed that Kinuthia approached him first and requested him to shoot a skit with him after coming across his video on YouTube.

"Me and Kinuthia met in his house and did content on how to be African Mothers after he saw my video on YouTube," he said.

He claims that there were other people with them who can confirm the truth in his statement and that the two had nothing going on.

'We shot a video the afterwards took pictures and that was that."He added.

This is after media influencer Tiktoker Kelvin Kinuthia fueled dating rumours by publicly confessing his undying love for Mtumba man.

The cross-dresser posted a photo of him enjoying a drink with a shirtless Mtumba man accompanied with love and a ring emoji.

Kinuthia captioned the post asking Mtumba man whether he would marry him.

Kinuthia says he would marry Diana B
Entertainment
5 months ago
WATCH: For the latest videos on entertainment stories