• You don't have to be choked, slammed to the wall or hit for it to be violence, the abuse can be verbal. 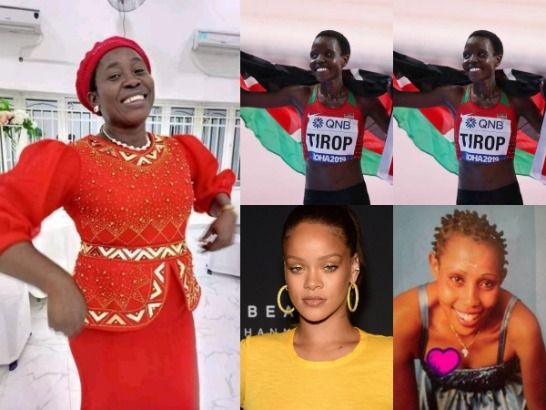 Celebs who are victims of domestic abuse
Image: Facebook

It is said that one does not have to beat you for it to be termed as abuse.

They can degrade you, humiliate you, scream at you or even consistently cheat on you.

We take a look at prominent celebrities who are victims of domestic violence. While some survived the ordeal others never lived a day to share their stories.

Olympian Agnes Tirop was a victim of domestic abuse, sadly for her, it ended up in her being killed.

According to an autopsy report by Government pathologist Dr Dorothy Njeru, Agnes was stabbed in her neck and the head hit with a blunt object.

Tirop was found dead at her home in Iten, Kenya, on October 2021.

Her husband Ibrahim Rotich was the main suspect.

Neighbours and family friends revealed she had been a victim of abuse for a long time but kept it under wraps.

Kalenjin musician Diana Chemutai Musila popularly known as Chelele was murdered and her body dumped inside her deserted house in Bomet County.

Her Administration Police husband Eric Musila was arrested in connection to the murder but ended up being released over lack of enough evidence.

The celebrated Nigerian star died a couple of days ago after 5 days in a coma.

It is alleged she has been a victim of domestic violence for a long.

According to screenshots going on social media, show that her husband beat her up by stepping on her chest.

On some occasion, she would be beaten while pregnant. On other days the husband would tie her up and ask the kids to cane her.

"Sometimes we feel we are afraid because when I am being threatened by a man I will be afraid to confide in another man but I would want to talk to a ...
Lifestyle
7 months ago

Tanzanian actress Wema Sepetu is in hot soup after she publicly said that she loves a man that can beat her once in a while. Sepetu has been called ...
Entertainment
9 months ago

Many of these cases of domestic violence among spouses are locked in air-tight rooms, only witnessed by the children.
Lifestyle
10 months ago

In her early twenties, Mariah Carey was married to record label boss Tommy Mottola, who was twenty years her senior.

The pair split after four years together, but almost two decades later on her TV programme Mariah’s World, the singer alleged suffering coercive control at the hands of her former husband.

"I was with someone at the time that had a lot of control over my life," she said.

He was older than me by a lot and had a lot of power and he wanted me to remain away from most people.

I never thought I would get out of there."

In an interview with US media houses Chris Brown narrated what transpired on the night he assaulted Riri.

According to him, there had been an argument after the  Fenty queen found out that her then bae was cheating.

Brown had admitted to being unfaithful to a work friend and Rihanna found out and “starts going off”.

“She throws the phone, ‘I hate you!’, whatever, whatever, she starts hitting me, we’re in a little Lamborghini, you know she’s fighting me,” Brown says.

“Like I remember she tried to kick me, just like her beating shit, but then I really hit her.

With a closed fist, I punched her, and it busted her lip, and when I saw it I was in shock, I was ‘fu*k, why did I hit her like that?

So from there, she’s…spitting blood in my face, it raised me even more. It’s a real fight in the car, and we driving in the street.”

The rapper then says Rihanna grabbed his crotch while she was trying to get his phone off him. In retaliation, he bit her “because I was trying to drive”.

Brown says he is sorry that he hit her, but he blamed the entire thing on Rihanna yet he was the one cheating.

Counsellors, medics, and psychologists advise that you can always reach out for help when experiencing any form of abuse whether physical, emotional or verbal.

[Opinion] There is nothing worth celebrating on women's day in Kenya

So many girls have dropped out of school due to teenage pregnancies.
Entertainment
3 months ago

'I was angry, I killed her with a knife,' rich kid on murdering diplomat's daughter

The brutal killing took place at his home on 20 July last year. CCTV footage showed her trying in vain to escape.
Crime
4 months ago

The abuse might not have been physical only, but also emotional.
Entertainment
4 months ago
WATCH: For the latest videos on entertainment stories