• Konde boy has so far given out eight expensive cars over the past three years. 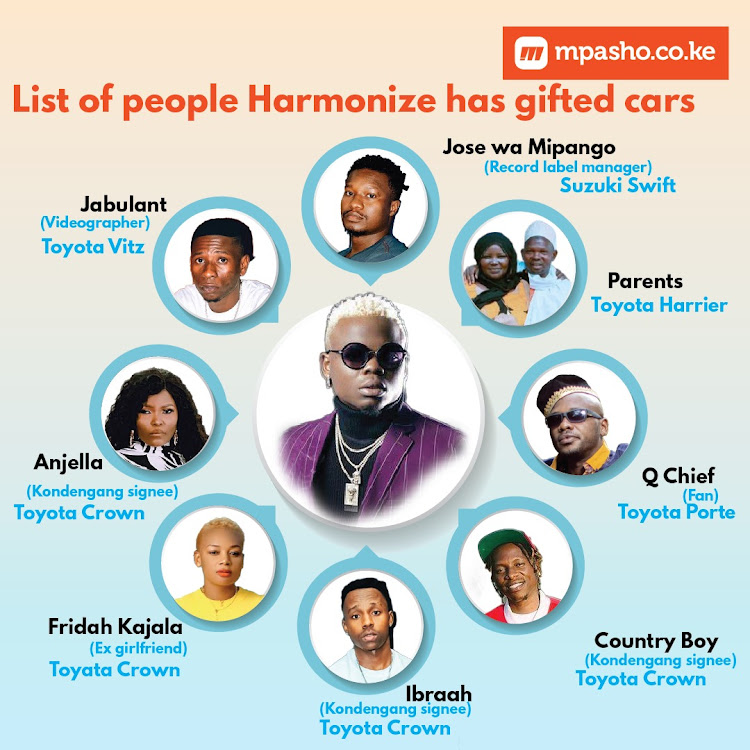 Konde Boy is by far the most generous artist in East Africa as his actions speak louder than words.

From his parents to his best friend here is a list of people whom Harmonize has gifted cars.

The Bongo Flava artist gifted his longtime friend and Manager Jose during his birthday with a Suzuki Swift back in May 2019. He said that he gifted him the car since he is the first person to believe in him before he began his music career.

Konde boy bought each of his parents a brand new Toyota Harrier to help them in movement in and out of the village.

Taking it to his Instagram, the singer shared the great achievement where he had bought a white and a silver Toyota Harrier for them.

Back in July 2019, Harmonize surprised many after he bought a brand new Toyota Porte for a fellow artist after he asked him for fare after a studio session

The award-winning artist gifted Ibraah a brand new White Toyota crown back in September 2021. He was the first signee under Konde Music Worldwide, a record label owned by Harmonize. This really moved Ibrah to a point that he knelt before Harmonize and shed tears of joy.

Being the fourth signee under the Konde gang, Country boy was gifted a brand new Toyota on the day he was officially signed under the record label.

Early last year, Harmonize surprised his lover with a brand new Toyota Crown while she was leaving the gym. This came weeks after going public with their affair.

The women Harmonize has dated and moments he begged his exes

Harmonize had been begging Sarah Michelotti.
Entertainment
3 months ago

Konde gang CEO Anjella, the third signee under his record label received a car at a time she was celebrating one year of being signed under the Konde Boy record label.

Jabulant is among new car owners enjoying a new ride after he received a brand new car from his boss as an appreciation of his hard work. The young lad is an official filmmaker, Videographer, a photographer working under harmonize.