Simons Kabu's secrets come back to haunt him

• Simon Kabu did not reveal to his wife that he had a daughter and that she was working for them, secretly. 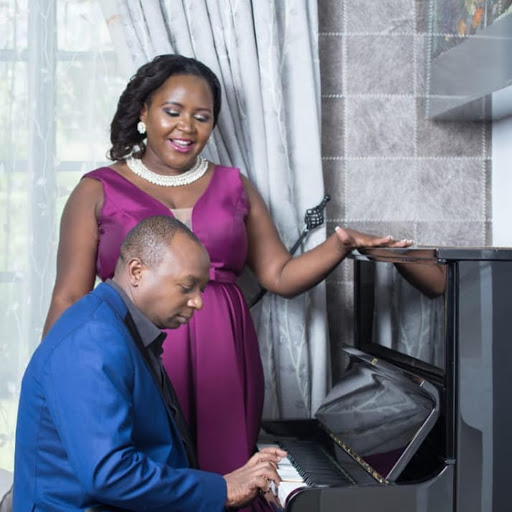 Managing director of Bonfire Adventures Sarah Kabu ranted about her tumultuous marriage to fellow co-owner of the business and husband Simon Kabu.

Sarah took to her WhatsApp stories and detailed how Simon took off with her children after a disagreement and has refused her access to her children.

She later informed her close family and friends that she needs prayers because she will not stay in a 'toxic relationship' to keep up appearances and feed into the 'couple goals' agenda on social media.

Read all about her candid comments on the matter complete with screenshots on the links below.

'I'm not mentally ill, I need your help!' Sarah Kabu speaks out over 'toxic' marriage

"My friends I am not mentally ill... I am speaking out to protect my life and my children... please pray for me." - Sarah Kabu.
Exclusives
4 months ago

Sarah Kabu who was known as the chairlady of the Goat Wives association advised other wives, "Ladies if you find yourself in this situation never ...
Exclusives
4 months ago

After Mpasho posted her leaked WhatsApp status calling out her husband, Simon went to his Instastories and defended the claims that had since gone viral.

He denied cheating on her or hiding the fact that he has a 24-year-old daughter who recently resurfaced in their life.

Simon even turned down offers from city women who propositioned him asking if they can be his side chic.

He said he is "happily married and could never cheat on Sarah."

Now, the real juice on the alleged split between the Kabu's was revealed by a family member of the Kabus.

On separating from Sarah, Simon Kabu downplayed the claims saying he would "never" cheat on her, "I'm happily married."
Entertainment
4 months ago

The said family member shared the information with Facebook user Wangare Ngugi who in turn leaked the screenshots.

Wangare wrote, "Apparently, this is the real saga behind Kabu's drama. Bonfire is Sarah's Brainchild. The lady can run this business 100%. Simon knows he's nothing without her...hence the Range Rover handouts.

Yet ANOTHER case of a queen who doesn't realize her power. I'm angry for her. Why do women do this to themselves surely?"

Check out the Whatsapp messages that were leaked online by Facebook user Wangari Ngugi - which have since been deleted. 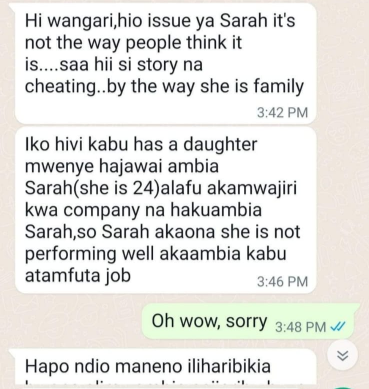 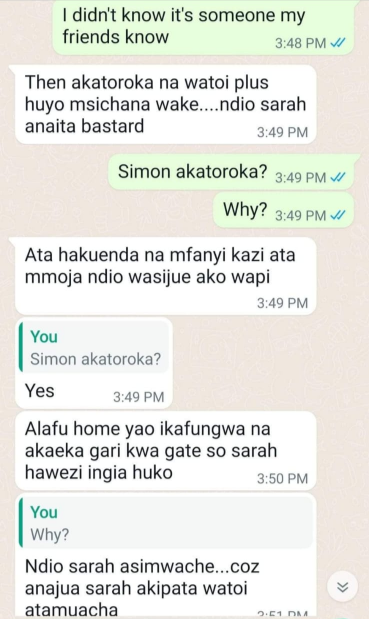 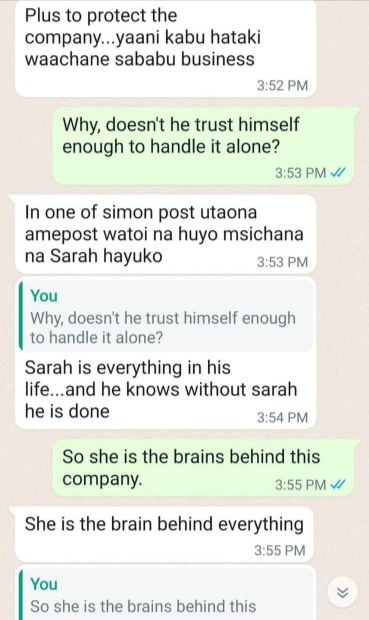 Simon Kabu - How I met my wife Sarah

Sarah has accused Kabu of being toxic through cryptic WhatsApp satus posts.
Entertainment
4 months ago

You are not getting married to get divorced.
Entertainment
4 months ago
WATCH: For the latest videos on entertainment stories