I would never cheat on Sarah - Simon Kabu

• An angry Sarah Kabu hung up on us when we called for comment on the issue, however, her husband decided to address the problems bedevilling their marriage. 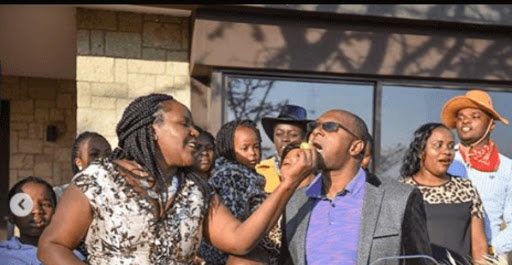 Bonfire Adventures founder Simon Kabu has come out to address claims that his marriage is on the rocks and has split.

Kabu who is in Mombasa with all his children engaged the curious social media in-laws over his marriage after his wife branded him toxic for unveiling his secret daughter.

She also went out of her way to say that Kabu took her children and hid them from her so that she could not leave him.

Read all about it in the two articles below.

Sarah Kabu who was known as the chairlady of the Goat Wives association advised other wives, "Ladies if you find yourself in this situation never ...
Exclusives
4 months ago

'I'm not mentally ill, I need your help!' Sarah Kabu speaks out over 'toxic' marriage

"My friends I am not mentally ill... I am speaking out to protect my life and my children... please pray for me." - Sarah Kabu.
Exclusives
4 months ago

An angry Sarah hung up on us when we called for comment on the issue, however, her husband decided to address the problems bedevilling their marriage.

In a lengthy QnA session with fans, Kabu answered what he could.

Asked if he has a 24-year-old daughter who he has been hiding from Sarah. He responded by saying, "Hapo kwa hiding apana but yuko."

Adding that having a child that age means he is, "very old but young at heart."

Kabu said that the children are safe with him that they are okay and that he did not kidnap them.

"I'm back from Paris and now at the coast for a holiday with my kids."

On separating from Sarah, he downplayed the claims and said he would "never" cheat on her, "I'm happily married."

Trouble started after Maribe called out Eric Omondi saying he was a deadbeat dad. She said although they talk he does not take care of their son.
Entertainment
9 months ago

One naughty fan asked Kabu, "Can we date?"

Swipe left to see some of his responses.