Louis Otieno son: He did not care whether I lived or died

• Silas Miami says he felt rejected by his dad and that deeply hurt his feelings. 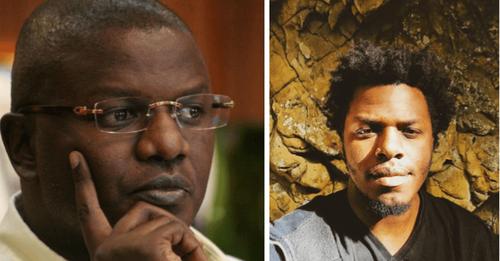 Silas Miami, son of ex-NTV host Louis Otieno, has experienced her disappointment against his dad.

The celebrated filmmaker says it's unfair how his life was thrown into the public, over a man who never cared whether he lived or die.

He shared this as he was responding to NTV's reporter James Smart who had requested an interview from him.

"A few weeks ago, James Smart reached out to me to request an interview regarding Louis Otieno. I suppose he's working on a profile.

I have no context beyond this. I appreciate his efforts to perform due diligence and wish him well with his project. This is all I sent him."

"I'm told my abusive mother is very unwell. Even at death's door, she refuses to swallow it and apologize...."
Entertainment
1 year ago

"I considered responding to your ask with a gift of Keke Palmer 'not knowing the man' - or Mariah STILL not knowing 'her'.

Because that is the truth: you've asked for my thoughts on someone whom I don't know.

I know he is genetically my father ,but I do not know this man. In fact, for years, only a handful of people knew he was my biological father.

I gave a telephonic interview five years ago with a writer for the Standard Newspaper. The profile was intended to be about my expanding work in film and Queer scholarship."

Miami says he  has no relationship with Louis hence people should stop forcing him to have one.

Adding that his dad denied him first.

"At the end of a 2hr phone conversation, the topic of my father suddenly comes up. "We're okay," I say. I beg Them to drop it.

They promise to At it go. A week later, the newspaper publishes a story that, instead of focusing on my work, now heralds a sensational headline linking me to Louis.

This media group then proceeds to sell the story to their tabloid subsidiaries.

Suddenly, my life in the public domain is irrevocably linked to a man I've only stet three times. Louis made it abundantly clear that he wanted nothing to do with me."

The filmmaker says denial by his dad hurt his feelings and hence he had to learn to deal with the trauma.

"I struggled with it. It hurt in unthinkable ways. Thankfully, trauma therapy and years of unlearning 'survival mode' have gotten me to a place of acceptance and healing.

So, here's my final statement on this: Louis Otieno is many things to many people. I understand that.

To me? Louis was a trash father who didn't care if I lived or died."

Adding, "I was a child. On the virtue of THAT alone - I deserved better. He did everything in his power to punish my mother and me by proxy for needing help.

This was all happening at the height of his success: polishing the tires of his car with kiwi, shaping the political opinions of a fractured nation because he 'sounded smart'."

Read the entire response below. 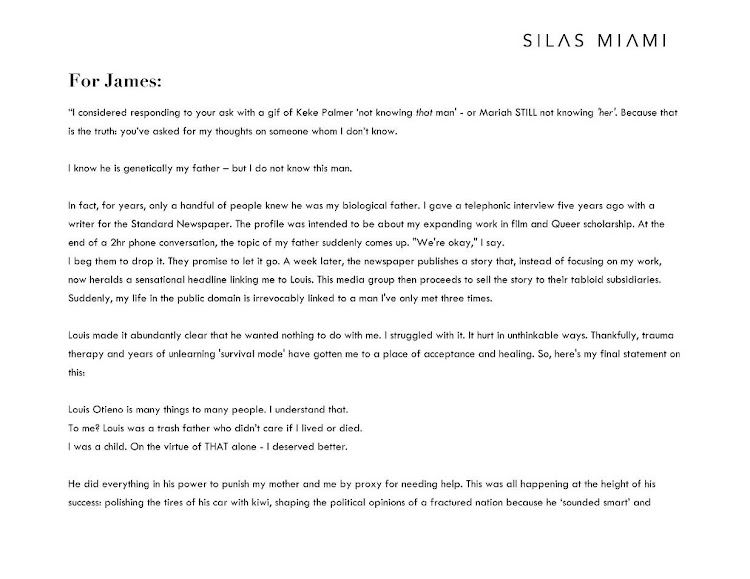 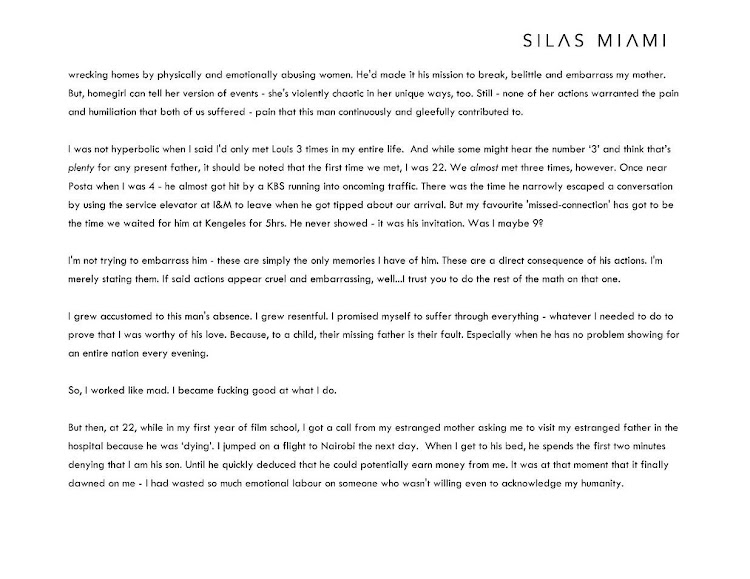