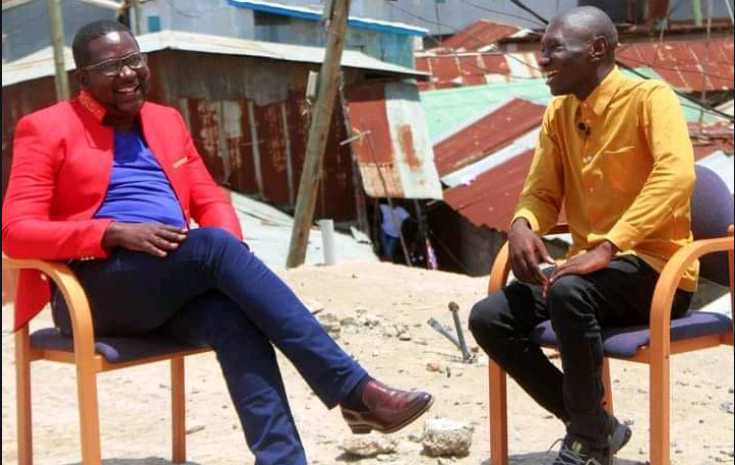 In May last year, comedian Churchill had an indepth interview with Kibera's son, Stivo Simple Boy.

During the interview that was later televised on NTV's Churchill Show, Simple Boy claimed that he is in love with a lady called Fridah, who also resides in Kibera.

Narrating their love story, the Mihadarati hitmaker told the comedian, that he spotted her by the roadside and could not help but bamboozle her with this punchline.

She loved his pick up line and they exchanged contacts and kept in touch. However, the one person he needed to impress was Fridah's brother who warned him not to break her heart.

He said, "Bora tuu usiwe mbwa mwitu, leo uko na huku kesho na kule…(As long as you don't turn into a wolf/wild dog, today you are here, the next day there...)"

Simple Boy also announced to Churchill that their love is meant to be and they are planning to formalise it by tying the knot.

Well, all these stories were debunked by Purity Vishenwa a.k.a Pritty Vishy whose TikTok video with Simple Boy went viral.

Check it out below if you missed that.

When the video went viral, Pritty was thrust into the limelight.

"It was not an easy time because everywhere I went people would mock me, others would congratulate me," Pritty told vlogger Kenya Central.

"People had different reactions. There were positive reactions and negative ones, the negative ones landed me in hospital. My ulcers flared up at that time," she added.

Asked what is your take was on Stivo Simple Boy's interview with Churchill Show where he said that he is planning to get married soon. Who was he referring to?

"I cannot answer that because you men are also difficult. Maybe I'm here saying I'm the main chic and I could be the side chic."

Asked about if Simple Boy had cheated on her, Pritty said, "In all relationships, there are ups and downs."

Should we expect a child with Simple Boy, "I won't answer that because I may say yes then you get the dude cannot because God has decided not to bless you. I would like a child with Stivo, but not now."

Stivo Simple Boy's girlfriend said, "Yes, I have witnessed all that, there is a job he did worth Ksh 120k the money that he got was Ksh 4,000,"
Entertainment
8 months ago

Rapper Stivo Simpleboy's girlfriend has shared memories of her childhood days when she was sexually abused by her stepfather.
Entertainment
8 months ago