Pastor Ng'ang'a explains why he is controversial

• About how he takes it when he is referred to as a controversial pastor, Ng'ang'a said not every insect that flies is a bee. 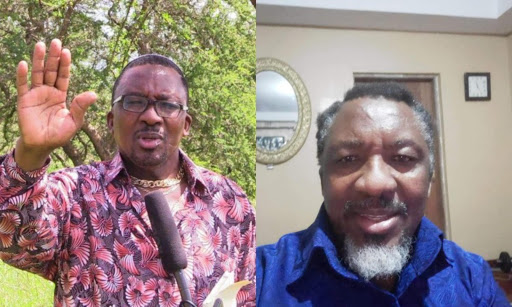 In an interview while in the US with Pacific Waves, Ng'ang'a said the God he knows is different from other people's God.

"I have done so many things that some of you don't know, I have smoked weed, I have raped, I have been in jail, I have stolen from people but now, I am serving God," he said.

The man of God went on to say that most Christians have spirits that keep haunting them yet they want to keep holding on to them.

"They don't want me to mention the spirits that are disturbing them, all they want is pastors who ask for money but don't ask people to repent."

He further explained that he does not agree with some things people want.

"There is a cow, a goat and a sheep. All these are animals but they are all different. In the same case, we have different callings in the ministry."

About how he takes it when he is referred to as a controversial pastor, Ng'ang'a said not every insect that flies is a bee.

"We have a fly, an insect but does not sting. I have been in the ministry, I got saved in jail after I fought my peers. The police officers tricked me to admit I had fought, and that is how my journey in jail started," he said adding that if anyone wants to help someone, help them when they have their freedom.

"Once they get in cells, they come out spoilt because of the tough life in jail. You are hardened," he said.

"I had a vision of serving God even before jail. My father died and I became notorious. Even in jail, I still had that call. I used to sing a lot there."

After jail, he said he lacked mentors as some of the pastors were selfish and feared he could take over their ministries.

"I don't like when pastor's keep begging and since I had a kiosk, he would come and borrow me 10 bobs, I wanted to be rich and start a church, not a beggar. I started singing at Railway and bringing people to the church, the pastor said I will overtake his church and they chased me."

Concerning his infamous outbursts of ‘matuta’ and ‘kiosks’, which made rounds on social media, Ng'ang'a was unapologetic saying that it was true that some of his congregants turned rebels after they joined his church poor and became rich.

"I had given that pastor a place to stay in my house, his wife came to my house with unkempt hair, I had to take her to the salon, so she could look descent."

He said he first came to Nairobi in August 1996, worked as a journalist, became a diplomat in 2003 serving in Nairobi and Los Angeles.
Entertainment
5 months ago