Huddah Monroe woke up with fire in her belly yesterday. The socialite who became famous for being beautiful and famous is unhappy with Kenyan ladies who have been criticising her.

Al Huddah is of the opinion that Kenyan ladies are being hypocrites criticising her about what she does with her guava, yet they are doing the same.

The men were not spared to with Miss Monroe adding,

"And the men who listen to a woman talk about others negatively. Yall dumb too. Coz she is doing the exact same behind the scenes." 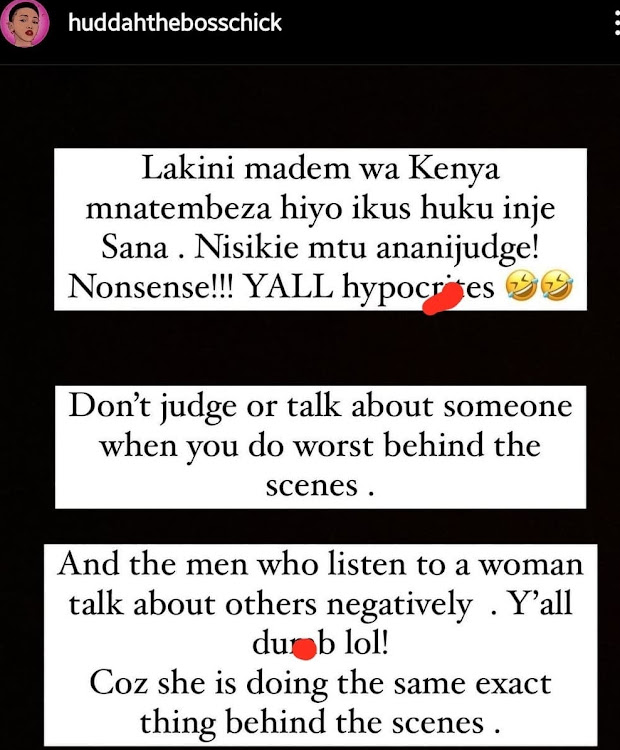 Last year, Huddah was honest about her past saying that she used to sleep with old men for money. She divulged this information on her Instastories, where she wrote,

“I wanna make one thing clear, I’m not where I wanna be in life, but, thank God I’m not where I used to be. For me to make the decision that I wanna be independent and have seven businesses that I’m running is because I was sick and tired of dating and f**king all these old rich men, being with them was so disrespectful, the way they treated me was so bad. And now I look back and I know what just because you are wealthy and I didn’t have sh*t, and now even flying me to a city it gonna take a lot of energy to wake up of my room to go and see a guy. By the end of the day, is that being independent gives you so much power. And don’t be fooled that ooh you won’t get a husband, or you won’t get this, you will whatever you want in life as long as you put your mind to it. And I encourage that to every woman."

Socialite Huddah Monroe has disclosed that a man once bought her a Ksh 7.5 million car when she was just 21-year-old.Alhudah who was born
Lifestyle
6 months ago