• Bien told Eric that the concert was planned even before he spoke about the industry. 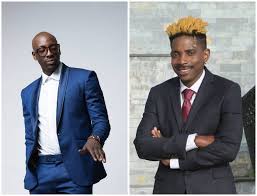 Sauti Sol's Bien has clapped back at Eric Omondi after he posted about Sauti Sol's concert scheduled for next month.

He shared a poster and captioned;

Responding to the post, Bien told Eric that the concert's plan was there even before he raged against the music industry.

"People have been working on this for months. Don't make it about you. Just keep on typing from your cell. The concert will be streaming live. Watch it from jail."

Eric Omondi has been trending for weeks after he attacked musicians saying they have slept on their talent and that the industry has become boring and lazy.

He added that he will be advocating for 75% airplay of Kenyan music. He organized a protest yesterday near Parliament Buildings which made him get arrested.

Despite his efforts to fight for the music industry, Kenyan artists did not show up to support him.

Raila pushing for artistes to earn 52% in skiza tunes

Performance artistes and creatives would earn 52 per cent of proceeds from ringback tunes – known as Skiza tunes — should MPs pass a bill changing ...
Politics
1 week ago