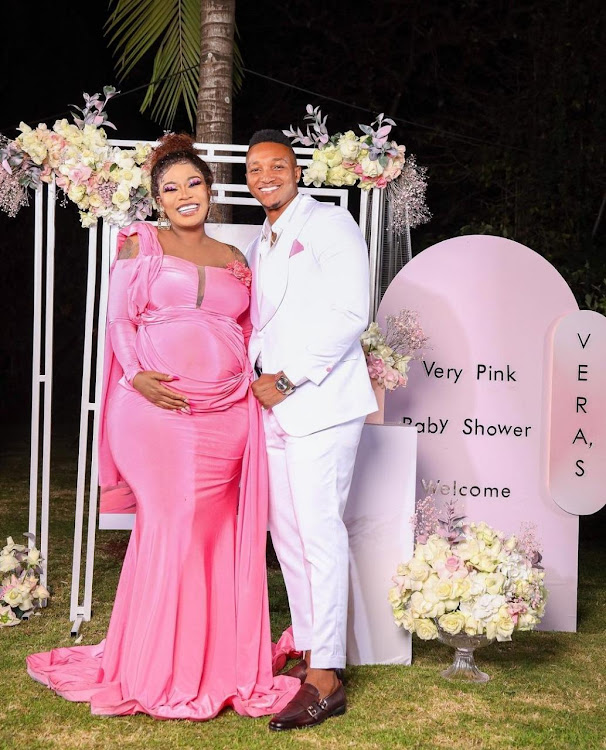 Vera Sidika and Brown Mauzo at the pink-thomed baby shower

In a past interview on a popular podcast titled Smartless hosted by Jason Bateman, Sean Hayes, and Will Arnett, the comedienne told the trio that she wouldn't want a ring if her man popped the question.

"You know, they present you with a ring. I want him to present me with the deed to a duplex or a 36-plex. Present me with an apartment building," she said.

Common, responded to the statement - the two are dating.

Speaking with TooFab he said: "She always says that. She's about getting the land. I love that; I mean, that's great. I respect that. You know, that's what she wants; you gotta give the woman what she wants."

Anyhow, over the weekend our very own celebrity couples, Vera Sidika and Brown Mauzo hosted a baby shower where close friends and family attended.

During the pink-themed baby shower, Brown presented Vera with an envelope in which he claimed there is a deed for a piece of land.

Presenting her with the title deed, Brown said, "I saw that most of the time when we go tere we go to an apartment. So it is important that we have a section where in future we can stay."

An excited Vera accepted the gift and could not hold back her emotions.

"I don't even know how I feel. Today is another day but I'm still watery from this. Brown Mauzo, you are everything I prayed for and more. You made me believe that God answers prayers. You can truly go through the worst and most heartless heartbreaks and still find  the special one that will be there to stay. God bless you for what you just did for our new family. It means the world to me. I'm still speechless. Generational wealth. such a thoughtful gift. I know our kids will have the best future."

• Njogu and Mary Lincon became the talk of town after their traditional ceremony last year.
Entertainment
4 days ago