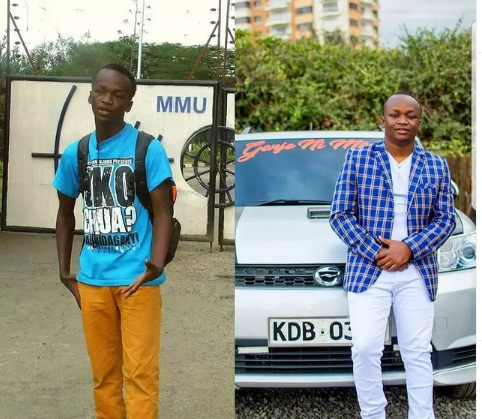 Celebrated Kenyan DJ, Vdj Jones, has come out to expose Kenyans and their hypocritical nature.

Sharing an old photo of himself on campus, Jones said that back then people never wanted to talk to him as he was broke.

But now that he has made a name for himself, most people including those who ignored him before want to be associated with him.

"Only God knows our futures. Usijichoche sana ukidhani ni uwezo wako, always be grateful for every step in life.

This is 7 years back at Multimedia University. Back then hata kuna watu hawangenibongesha daro juu I was a broke nobody. 😂😂 Lakini Sahii wanashinda "bro". Nwei ya Mungu ni Mengi, ya kuku ni mayai..

Jones trended this year after Citizen TV accidentally shared his photos claiming he was among three young men who had died in a river in Muranga.

The series dubbed 'Mto wa Mauti' is about how people are being killed and bodies were thrown into a river in Murang'a.

By the time the series aired Murang'a residents had so far discovered five bodies in less than a year.

Jacque Maribe yesterday paid a courtesy visit to Gatundu Member of Parliament Moses Kuria at Karen hospital where he has been admitted for two weeks.
Entertainment
6 days ago

Jones was among those mentioned as having perished in the river, and so he countered the claims, saying he is alive and kicking.

Through his socials Jones told off Citizen TV, insisting he was alive and kicking;

"I wish to disassociate myself from this report by Citizen TV Nipashe News. I am alive and kicking 😡😡😡😡Mbona mnaniua mapema???

I will press charges against them and the reporter Gatete Njoroge.