• While addressing the issue on Jeff Kuria's TV, Karen said she has never smoked. 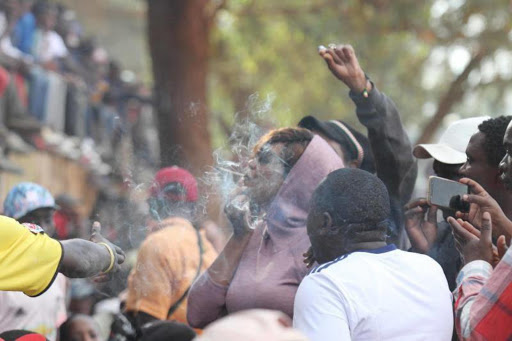 Politician Karen Nyamu has addressed allegations that she uses marijuana.

The city lawyer two years ago, while attending Koth Biro finals at the iconic Umeme Grounds in Ziwani, where Kingstone FC beat Allin Jua Kali, she was pictured smoking.

Nyamu, who was seated in a crowd of football fans, could be seen puffing before passing it to a male fanatic who was seated next to her. Other people surrounding her were busy chewing mogoka.

While addressing the issue on Jeff Kuria's TV, Karen said she has never smoked.

''You know what happened, the youths use these things in the estates and slums. We only condemn them not to use but we don't give them jobs.

So, I went there and as we were talking they told me, Karen, vuta moja. To fit into that crowd, I took some puffs but didn't inhale. And now, photos were shared.''

''I have never bought ndukulu with my money or even bought for someone. I hear it's 50 bob or a hundred. Honestly speaking I have not used it. It's rumors.''

I don’t know why people think I’m wild. I’m very conservative, Iam rebel against many things in life. I joined politics on my own no one pushed me. #politics #life #newvideoalert #jeshi001