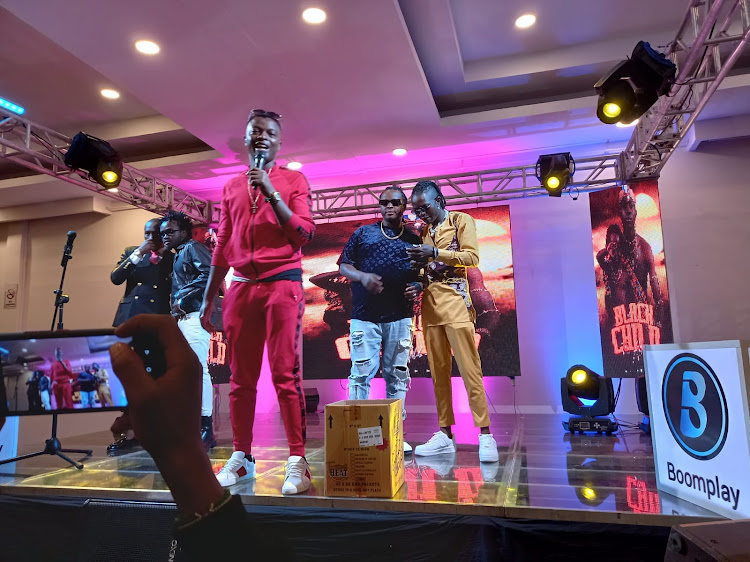 Ringtone and Bahati threw shade at each other during Mr Seed's album launch.
Image: MOSES MWANGI

Mr Seed's album launch went down on September 13, 2021, but not without incident.

Many celebrities were in attendance to support one of their own. Ringtone joined Bahati, Mr. Seed and Dk Kwenye beat on stage. They were fundraising for Mr Seed.

"Chairman karibu bwana," The 'Sari Sari' singer said in reference to Ringtone in which Bahati interjects with,

"Na ajue ni mimi niko na Gospel song kubwa saa hii Kenya. (Ringtone should also be informed that I'm now the the one with the biggest gospel song in Kenya.)"

The two also measured their financial muscle based on who contributed higher than their rival.

Ringtone known to have a flare for the dramatics replied with: "Naona huyu kijana ana jipiga piga kifua...skia niku ambie tuliwa achia followers. Followers ni nyinyi pesa ni sisi. (I can see this young man is thumping his chest...listen, issues to do with having many followers, we left that for you. You are the guy with many followers, i'm the guy with the money.)"

To which, a scuffle ensued where Bahati shoved Ringtone and grabbed the mic.

Mr Seed had to intervene to remind them that the event was about him and his launch.

Bahati did not stop at that he said sarcastically, "Wewe wacha chairman atoe pesa. (Let him contribute money)"

In which Ringtone left the stage as if in defeat.

Nimo responds to allegations her husband cheats on her

"He is dating me and not everybody else. He is perfect the way he is." - Nimo
Exclusives
6 days ago