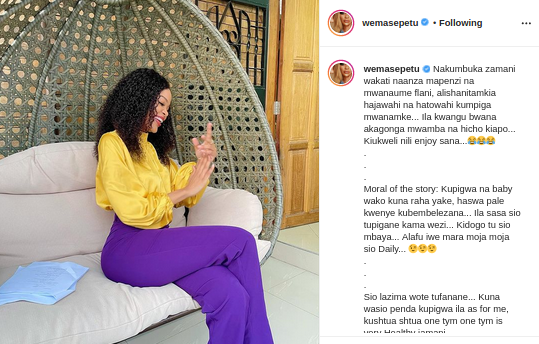 Tanzanian actress Wema Sepetu is in hot soup after she publicly said that she loves a man that can beat her once in a while. Sepetu has been called out by many social media users for seemingly advocating for domestic violence.

Sepetu said this on her show 'Cook With Wema Sepetu' while hosting Amber Lulu, a songstress who has been a victim of domestic violence.

Sepetu later took to social media to say that the reason she loves a man who can discipline her is that he will later have to pacify her, a process she says she enjoys.

(I remember when I fell in love with a certain man, he told me he would never beat up a woman. Then he beat me up, I enjoyed it)

(Being beaten by your baby has its own joy, especially when he starts pacifying you, But not being beaten like a thief, just a little. And should do just once, not daily)

(We can't all be the same, there are those that don't like it but for me, it's very healthy.)

Sepetu was once said to have been physically abused by Diamond Platnumz.

Wema Sepetu recalls when Diamond beat her up

Fans have come out to call out Sepetu asking her to apologize;

Judithbosibori: Shocking , a platform with 8M fans can be used to talk and glorify domestic violence. Huyu ana bahati sio mkenya yaani saa hii angekua ana apologize. She even made a post about it as if the video wasn't enough.

Ishy123: It’s sad that some people wanahisi kupigwa it’s a sign ya kupendwa

Harie_Ginah: A woman openly advocating for domestic violence.... What a shame

Furaha-June: Wema is sooo foolish not to understand the impact of her words as a public figure. Ukishafika level ya watu wengi namna ile kukuangalia, you gotta be careful with what you say. Impact ni kubwa sana, na ndio maana wanatumika kwenye ubalozi maana influence ni kubwa. Second, by saying that, ni kama ametoa blueprint ya how a man can treat her. Na kwakuwa kasema openly kwamba kupigwa ndo anapenda, basi itafika point atapigwa sana na hatobembelezwa at all. Maana mwanaume anakubembeleza kwa fear ya alichokifanya. So if no fear why sweat?

Real_Cahmng: She wont get it everBecause she only choose to be right on this issueIts about fame & publicity and not what she like or dont like