'Thanks Lilly,' Alfred Mutua thanks ex for pushing him to celebrate birthday

•The outspoken governor held a double party alongside Tanzanian star Rayvanny at an invite-only party held at Ole Sereni on Sunday 22/08/2021. 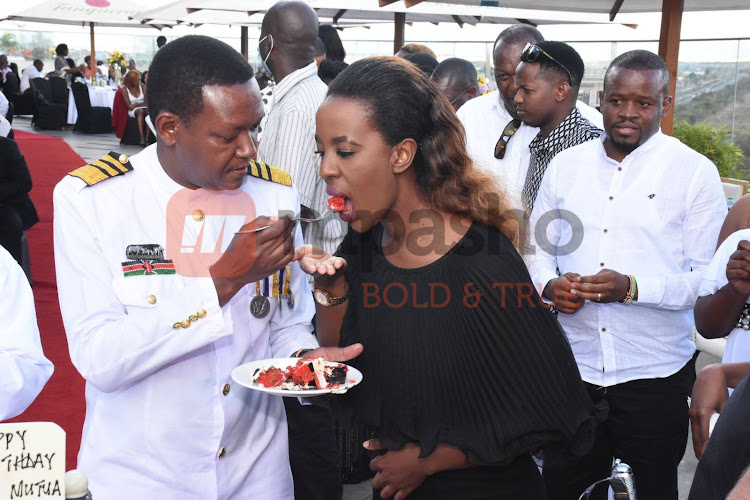 Machakos governor Alfred Mutua has thanked his ex Lilian Ng'ang'a for pushing him to hold a party and celebrate his 51st birthday.

The outspoken governor held a double party alongside Tanzanian star Rayvanny at an invite-only party held at Ole Sereni on Sunday 22/08/2021.

Through his social media, Mutua penned,

"Thank you Lillyanne Nganga for encouraging me to host my birthday party. It was my first ever birthday party and it was better than I expected. The music, company, and ambience were amazing. Thanks to all my friends, the good wishes and positive vibe from good people."

The couple broke up two months ago after dating for several years.

They announced the breakup through their social media platforms, with Mutua saying they would remain friends.

"There is a song by Roger Whittaker that has the line: “the first time we said hello, we started to say goodbye.”Lillian and I have been a blessing to each other. Two months ago, we decided to slowly disengage.

We are on amicable terms and remain very close as friends. We will continue to talk, meet and share ideas constantly.

Lillian has been an excellent First Lady and even though she will do some projects under the Lillian Nganga foundation, we have agreed she can continue with her county projects.

Constable Bernard Sivo had first shot his girlfriend Mary Nyambura in their house and broke her right leg. He thought she was dead but the woman went ...
Crime
1 year ago

"She will be a close advisor as I Govern Machakos County and run for President because I trust her sharp insight and heart. She has always been my number one fan. Our love for each other is permanent but I think at times, space and new directions are important.