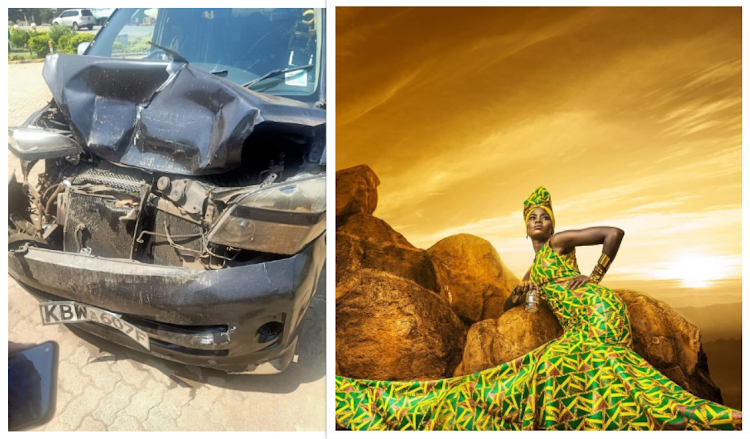 Beauty queen Debbie Trixie Oyugi has narrated how she survives a car accident without a scratch. This is after the car she was travelling in rammed into the back of a trailer.

Taking to her social media, Debbie narrated, "Early morning, I get a phone call from Malcolm David. We catch up, pray then he speaks to mum, Reverend Priscah Oyugi asking her to partake the Lord's table (communion) before I leave.

Josiah, our driver, arrives to pick me, we did not get to partake in the communion since everyone was lying in wait. Bishop Norbetus Oyugi prays and I leave. When travelling with Josiah, I am always in the co-driver's seat.

I start listening to a #150daysofPsalms broadcast with my eyes closed to just set my mood straight. I hear a loud bang, in my head am thinking why would Malcolm record in such a noisy place.

Opening my eyes, you can imagine the shock I got coming face to face to the back of the container trailer. The trailer driver then fled the scene."

She continued, "When I talk of the God of preservation, I know Him. I have seen Him. Nothing on my body was touched. The arrow that flies by day did not touch me. He has fulfilled His word yet again. I am safe and sound. Preserved."

Surely he will save you from the fowler’s snare and from the deadly pestilence. He will cover you with his feathers, and under his wings you will find refuge;his faithfulness will be your shieldand rampart.You will not fear the terror of night,nor the arrow that flies by day,nor the pestilence that stalks in the darkness,nor the plague that destroys at midday."

She concluded, "I return all the glory to only Him. My keeper."

As a result of the impact, the driver, one Victor Prengei sustained serious injuries and was rushed to Moi Memorial Hospital for treatment while ...
Politics
1 year ago