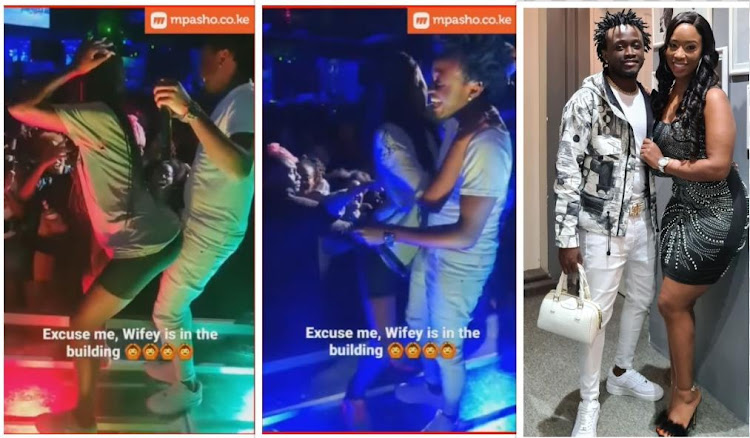 Bahati on stage with a female fan. He posed with wife, Diana Marua before the gig.

Yesterday evening, celebrity couple Bahati and Diana Marua had a wild night out.

Bahati who has ditched his Lord has been unleashing contemporary music about love and has planned gigs in clubs.

In one of those gigs, a viral clip of a Nairobi girl in biker shorts is seen grinding on a very uncomfortable looking Bahati.

He captioned the video, "Excuse me, wifey is in the building."

It is at this same event where his wife was also attending and watching all this.

See the video below.

Robert Burale said, "After preaching the gospel, there is an emptiness you feel. You have to come back to a wife. The body is tired you need someone ...
Entertainment
2 months ago

It doesn't seem like Bahati's wife has an issue with his fans, she knows he is working.

Anyhow, Bahati shared a video of Diana enjoying herself at the gig dancing while sipping a drink.

At some point, Diana gets on stage and hypes the crowd by performing one of Bahati's hits to the pleasure of the crowd who cheer her on.

Later Bahati wrote on his social media, "It has been a tough week for this girl diana_marua and today she came to my show at Club Laviva to have some fun and clear her mind," he posted.

Netizens obviously had something to say.

cate_b_joe: Bahati will not go far without cheating his very close

Steve Kay will not negotiate with MP Didmus Barasa, "Ignore the rumours. What we need is justice from court of law."
Entertainment
2 months ago