Willy Paul ridicules Ringtone after he was clobbered by Robert Alai

• Willy Paul insinuated that Ringtone deserved that for being 'mouthy.' 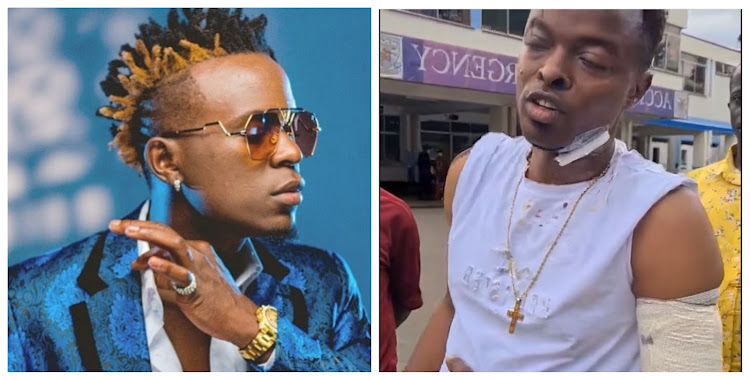 Musicians  Willy Paul and Ringtone Apoko have been longtime foes.

And now, Willy Paul has found the opportune time to mock Ringtone, by kicking him when he is down.

In a video on Instagram, Willy Paul ridiculed Ringtone after he was hit by blogger Robert Alai on Friday.

He insinuated that Ringtone deserved that for being mouthy.

The Friday encounter with the blogger resulted in the arrest of Alai, while Ringtone went to seek medical assistance at Kenyatta National Hospital.

Speaking exclusively to Mpasho, Ringtone said that the conflict was sparked by misconduct by Robert Alai in traffic.

"We were on the roundabout on Oloitoktok Road when the lights turned green, he did not move his car and people behind him were hooting. He removed his hands from the window and threw them.

I overtook him and saw it is him, I took my hand out of the car and hit the side of the car, and threw my hands at him. He followed me till Dennis Pritt Road where he rammed into my car and then got out with a rungu and hit me with it," Ringtone told Mpasho.

Gospel singer Ringtone and blogger Robert Alai have caused a furore in the Nairobi roads, causing  traffic after they were both involved in a road ...
Crime
2 months ago

Anyhow, in true Ringtone fashion, the commotion caused a crowd to gather. Ringtone loves crowds. He loves them more when they sing his praises.
Entertainment
2 months ago