• Omosh described his marriage dynamics, "I live with one, the other one I visit. I have five children in total and my eldest is 26-years-old." 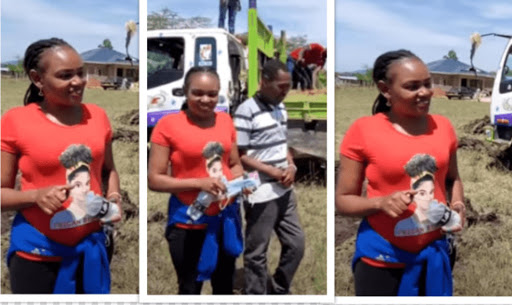 TV actor and comedian Omosh - real name Joseph Kinuthia Kamau - has explained why his two wives were not present at the house handing over the ceremony in Malaa, Kangundo.

Good Samaritans promised to build Omosh a house and yesterday it was handed over to Omosh officially.

Asked why his wives were not present, he said "It was short notice so that is why they were not here. Also they had other pressing issues that they could not leave behind. Initially the launch was for last week but it was moved."

In a past interview, Omosh described his marriage dynamics in an Radio Jambo interview with Massawe Japanni.

"Things are okay, flowing well. I live with one, the other one I visit. I have five children in total and my eldest is 26-years-old."

Omosh advised, "If you have a side dish that you trust and you are sure she can make a good wife, take her to the first wife and tell her you love this woman and you want to marry her. In my family, we have a lot of polygamous marriages."

Asked when he will move into the house, Omosh said that there is a little bit more preparation he needs to do like get furniture and a good school for his child.

"I have seen around here there is no primary school that my child can go to that is near here. So preparations for that have to be made first," Omosh noted.

Jimal Rohosafi might be a financial titan with a nous for making money but that brilliance doesn't always translate to whatever he understakes.
Exclusives
1 week ago