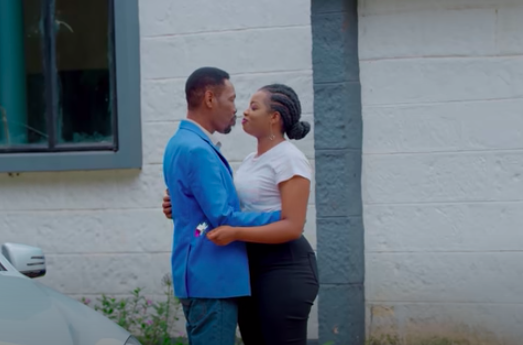 Comedian Omosh has responded to a viral video of him 'kissing' a lady in a music video.

In his latest music video, singer Ala-C featured Omosh as a rich man, who sweeps a lady off her feet.

Starred in the video, Omosh appears to be kissing Naomi Kuria.

However, Omosh has told off Kenyans who insinuated that he really kissed Naomi Kuria.

"Ala c is my friend, and he reached out to me to feature in his music video. That's where fans were confused, their interpretation was wrong. That was a camera trick, a camera can capture you from a short distance and bring the illusion of kissing," Omosh said.

Speaking exclusively to Mpasho, the actor said that he holds high regard for his family and would not act in such a manner.

"There are things you can not do when you have a family. Also, we are professionals, you cant do some things. There is a way it is done in video editing. I respect the lady, she has her family. My wives know it's a camera trick. Some of my images doing rounds are photoshopped."

On Wednesday, the actor was filled with joy after being handed over his newly-built 3 bedroom house located in Malaa.

Omosh is featured as a man who has a huge mansion and drives the luxurious Mercedes Benz.
Entertainment
2 weeks ago