• The upcoming artist is seen performing antics similar to those of Embarambamba. 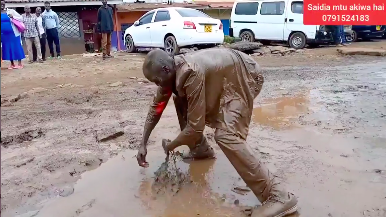 Kisii gospel artist Embarambamba has taken a backstage in music, and now his replacement has emerged.

Geoffrey magembe from Kisii has taken social media by storm, after shooting a music video, swimming in the mud.

In a video that has gone viral on social media, the upcoming artist is seen performing antics similar to those of Embarambamba.

But where is Embarambamba?

The Kisii artist had found dalliance in the eyes of Kenyans,  who laughed and shared his videos on social media.

But one day, the ceiling came crashing on Embarambamba after his inappropriate video at a night club emerged.

He later on came out to defend his actions, saying that it was his way of spreading the gospel.

However,  many of his supporters felt embarrassed by his conduct.

Embarambamba has since been under cover, and recently he alleged that his Youtube channel had been hacked.

'Look at the statement of the song before insulting me,' Embarambamba responds to his trending video

'Look at the statement of the song before insulting me,' Embarambamba responds to his trending video
Lifestyle
2 months ago

For this and more news, join our super exclusive Mpasho Telegram group for all the latest and breaking news in entertainment.