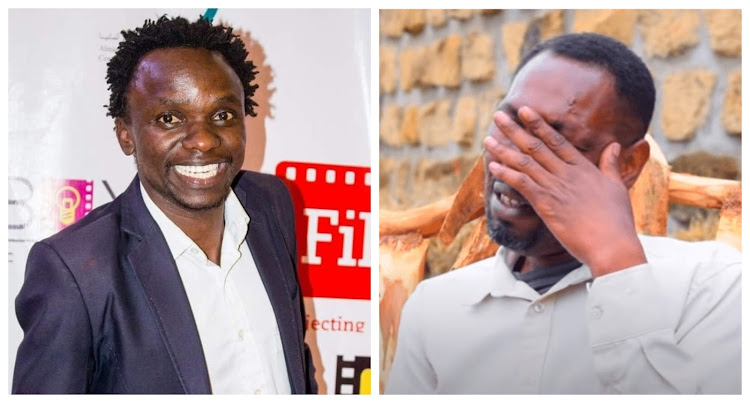 In a comment on Facebook, Eddy said that he reached out to Omosh when he received money and big offers after his plea for help.

According to the actor, he advised Omosh's wife to ensure he goes to rehab before planning on how to spend the money received.

He wasn't picking my calls being that he had a PA I then called the wife and nika explain by telling them they should not use the cash unless akubali rehab whereby atarudi after 3months when he is in his right senses, now its funny that I called him yesterday and he tells me wife yake hakuwai mpea message ya rehab and also the PA by then didn't tell him nimepiga.

Now maji imezidi Unga he has nothing ata 5 bob ya sigara. It's either ashikwe na force mpaka rehab coz I can see suicide coming from far," Eddy said.

Apart from Eddy, fellow creatives who know him well have also insinuated that Omosh has a problem that can not be solved with money.

In a comment on one of the posts about Omosh's second plea for help, actress Jacky Matubia said; 'I told you.'

After his plea for help in  February, Kenyans were quick to cast stones at his family, especially his sister Naomi Kamau, who is a renowned actress and producer.

Naomi told off the critics saying they know Omosh better than anyone else.

“Before you start crucifying us online as a family for neglecting our brother, reach out and get our side of the story, no sane human being can neglect his or her blood relation.

Omosh is our brother and we love and care, we’ve done everything humanly possible to stand with our brother and we’ll still do over the years, come sit us down we reason together, I’ll stop it at that coz these are issues we don’t want to share with the media, we’re a family and we’ll try to sort our shit,” Naomi said.

Mtado? Omosh needs your help and is unapologetic about it

By asking for a Camera, Tripod and lights, Omosh showed that he is ready to go out and do his own hustle.
Entertainment
3 months ago