How Diamond reconciled with Mzee Abdul after disowning saga

• Abdul Juma has broken silence on the paternity issue.

• He blames his ex-wife Sandra Sanura a.k.a Mama Dangote and claims that she poisoned his son against him.

• Diamond is now allowed to use Mzee Abdul's name. 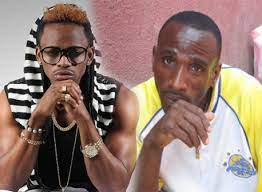 Diamond and his dad, Mzee Abdul

In the traditional African culture, it is taboo to denounce your parents, more so in such a public forum as Bongo superstar Diamond Platnumz did.

Now, his father, Abdul Juma has broken the silence on the paternity issue. And he also reveals how they reunited with his son despite the murky drama.

But here is the twist. He blames his ex-wife Sandra Sanura a.k.a Mama Dangote and claims that she poisoned his son against him.

Speaking to Global Publisher, Juma said; "Diamond has not spoken because his mother confused him with these claims. I had never heard of Mzee Nyange till Sanura came out with the claims, and that is why I told Diamond to stop using my name.”

Being the forgiving parent that he is, Mzee Abdul announced that he has no ill will towards his superstar son.

"I was hurt when Diamond rejected me. I was indoors for two months. People only forgot about the saga when Magufuli died."

He added, "On Eid Ul Fitr, I was asleep when I received some money on my phone. I received a call, and it was Diamond speaking. He identified himself as my son. I called Sheikhs and neighbours to my house, and we held prayers and had a meal together," he said.