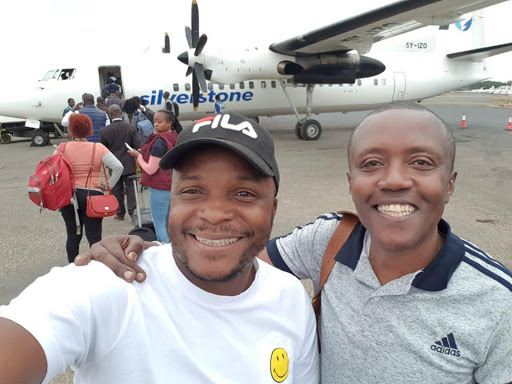 Classic FM presenter Maina Kageni has promised to support his colleague Jalang’o on his political ambition.

Jalang’o who has announced his bid for the Lang’ata Constituency seat hosted Maina on his YouTube channel where he encouraged him to vie.

One condition he gave Jalang'o was to vie as an independent candidate.

Oprah pulled her strings and made sure obama spoke at that democratic convention which moved people. She brought in people she knows to endorse him. His dream began with Oprah.

I will give you money and I will be at your rallies because I am not at the beck and call of some party leader.

He cautioned that joining politics was the fastest way to go broke.

If you go into Jubilee or ODM, your thinking must conform with the thinking of the people at the top. Anything outside that and you’re branded a rebel, so suddenly the Jalang’o we know getting into politics won’t be the Jalang’o we see.

Look at Moha, we were hiring that fiery guy to go make noise in Parliament to advocate for change on certain things across parties for the good of the country then....Look at our friend KJ who I love more than life, but he had to conform because that is how politics in Kenya works which is so sad."