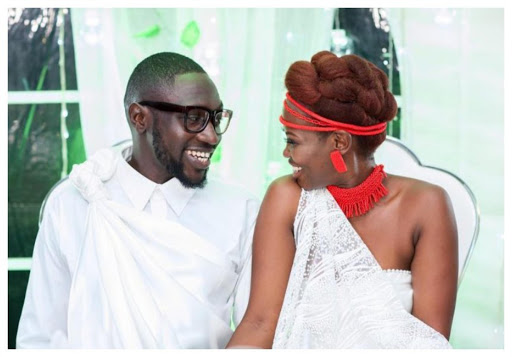 Sauti Sol's guitarist Polycarp Otieno and his wife Lady Mandy have opened up about the birth of their child.

The two were featured in a recent episode of 'Sol Generation' aired only on Showmax.

Speaking about their experiences as first time parents, they both revealed how they reacted after meeting their son for the first time.

Polycarp said he wailed like a baby and left everyone in the room wondering what was wrong.

Lady Mandy on other end said that the minute she heard the midwife says she could see the head of the baby, she knew she had made it to the final stage.

"The moment the midwife said she could see the head of the baby. I think that was the magical word I have ever heard. Coz I knew finally this is our end.

Polycarp said that he could not control himself when he met his son.

I fell on the floor wailing like a small child. Everyone was looking at me wondering what was wrong with me.

I took him and held him on my chest, I cannot forget that feeling. It was the most amazing feeling ever.

Lady Mandy added that when she saw the baby she felt like she had known him forever.

It like I have known you. I could not believe that I was holding someone who I have had conversations with, I have had moments with that were only for us

She then thanked her husband for being there the whole process.

'I would not have done that without Polycarp.

We held each others hands and As tried and exhausted as I was, I got the energy to keep going. You did well Papa.