Gloria Muliro reminisces "The past is a place of reference" 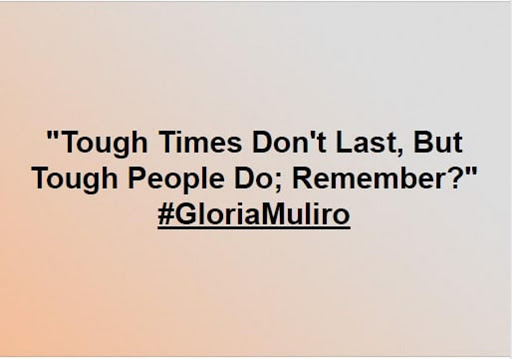 Gloria Muliro is not about to go back to her past, let alone think about it. The gospel singer broke up with her husband Pastor Omba, who had been rumoured to have cheated. These are claims he came back to rubbish.

Months after their separation, Pastor Omba moved on with another woman. Gloria Muliro has been keeping it low.

Recently, she proved she wasn't about to take him back in a caption that read;

Pastor Omba recently defended himself in an interview with a local channel that;

SHE HAD NO PICTURES OR EVIDENCE NOR DID ANY OTHER WOMAN COME OUT TO SAY THAT I WAS DATING HER.

SHE WAS JUST SAYING WHAT SHE HAS HEARD FROM HER FRIENDS, I DID NOT CHEAT, I WAS FAITHFUL. WHY SHOULD I CHEAT? WHATEVER SHE HAS EVERY OTHER WOMEN HAs. SOMETIMES YOU NEED TO FOCUS ON YOUR MAN THAN ON OTHER PEOPLE. IT WILL ONLY BREAK YOUR MARRIAGE.

I LOST A LOT OF FRIENDS, THERE WAS TEAM GLORIA AND TEAM OMBA AND MINE WAS VERY SMALL YET HERS WAS BIG BECAUSE SHE IS A CELEBRITY.