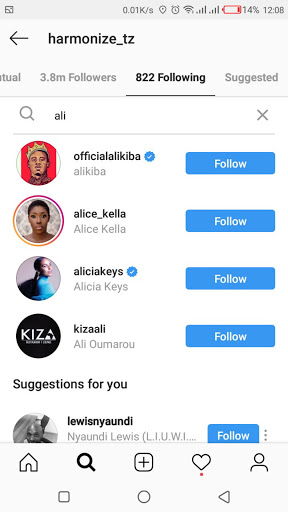 Harmonize left WCB but fans came to know of this just recently. Well, it seems like after exiting this record label, the Show Me singer is doing everything that he couldn't do while at the label.

The first public thing he did was to follow Ali Kiba on Instagram. Kiba and Diamond have been known to be frenemies for a long time. It will be remembered that Ali Kiba refused to properly greet Harmonize when they met at a funeral.

Maina Kageni, Classic 105's presenter and good friend to Harmonize also disclosed that the singer had left the label.

HE IS IN THE PROCESS OF LEAVING WASAFI AND SETTING UP HIS OWN RECORD LABEL CALLED, ‘KONDE GANG

Sources say that the singer's contract is not over but has paid a certain amount of money to be able to get out of the contract with the label.

The relationship between Harmonize and Diamond has gone sour but the two have kept silent about it. I mean, rumour has it that Harmonize might not perform at the One Africa Fest, which he was booked for while at WCB.

Harmonize first came into the limelight as WCB's very first signee with the song Aiyola. Since then, he has been on the top of music charts.