Riswa! Celebrity scandals that have rocked the gospel industry 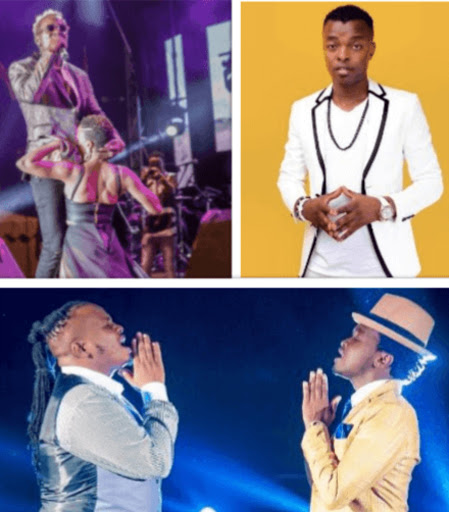 Gospel artistes no longer shock us with their scandals.

Some fans cannot differentiate the gospel artistes from the secular ones either. Actually, the secular artistes live a straight and narrow life more than our brothers and sisters in Christ.

Here is a list of Kenyan gospel artistes who have brought shame and scandal to the church.

Bahati hid his child and baby mama for 2 years

Bahati revealed he had a child after media outlets caught wind of the news. Yvette Obura was Bahati's first girlfriend with whom they share a child.

Bahati decided to show her off when it was claimed that he had neglected them and was not paying child support.

The dramatic divorce between Gloria Muliro and Pastor Omba

Gloria Muliro opened up and spoke about how she has been suffering in silence. She claimed her ex-hubby Pastor Omba was a philanderer.

Pastor Omba is yet to give his side of the story. He has moved on and now has a family.

Eunice Njeri got married to Izzo and annulled the marriage hours later.

Less than three months later, Eunice announced that she is not married to Izzo and that her heart "was in Africa" so relocating to the USA was not her cup of tea.

Gospel music insiders claim that DJ Sadic lost the love of his life to Majic Mike.

Some claim Sadiq and Ann Murugi's romance was cut short when Majic Mike waltzed into town and won over Ann's heart.

In the past when Sadiq was asked if he was dating Ann, he gave a non-committal answer, saying that they are "good friends".

He friend-zoned her to the public.

Hence the reason why when Majic Mike got into her life, he did not second guess himself.  And before long, Ann gave her heart to Majic.

This is something that broke DJ Sadiq's heart. To date, he has never spoken about his relationships.

Majic and Ann are now married.

The baby mama to gospel star Ole Willy, who is married with two children, called him out for refusing to help her out with child support, and it's hard for her to raise their two-year-old son.

I met Ole Willy at a city night club back in 2016 and was introduced to him by a mutual friend. We clicked and started dating.

In the same year, I gave birth and we kept it on the low. He promised to be sending 5k every month for the child's upkeep, but he rarely fulfills his promise. At times he sends less or doesn't send anything at all. In December he sent 2k only.

When reached for comment, Ole Willy was brief and promised to call us back. He said;

Whether I have a kid out of wedlock or not, in our culture I know it sounds bad. Because people will see you like you've been sidetracked or something.

Ringtone has a 4-year-old baby whom he denied. Industry insiders are shaking their heads when he claims he cannot find a wife yet he denied his own flesh and blood.

Well, according to Angel, she was in a relationship with the controversial singer and after making love a couple of times she found out that she was pregnant ...but on informing the Pamela hitmaker, he begged her to abort

Read all about it in the link below.