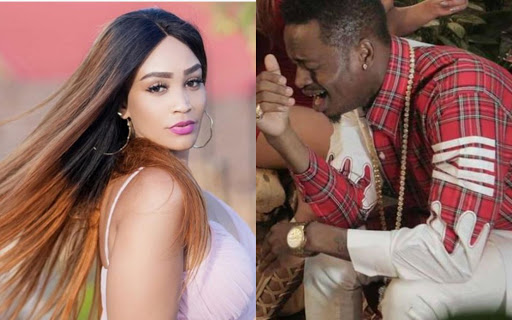 The video, which was uploaded a day ago, has 1.8 million views already.

Diamond has shared the song heavily on social media platforms with the help of family, friends, and fans.

The lyrics are bomb

Diamond, who parted ways with estranged wife, seems to be still hurting and he had to sing about their failed relationship.

He talks about how love has caused enmity between him and his children and only sees them on Instagram.

He actually unfollowed them. In his lyrics, Diamond sings,

Naishia kuwalike Insta. [Love has brought enmity between my children and I. Nowadays I don't see them physically. I only see them on Instagram.]

After their nasty break up, Zari blocked the singer from accessing his childrens' social media accounts. She later unblocked him but again last month, Diamond unfollowed them.

He goes ahead to advise young men out there not to force love, but let go of someone who doesn't love you.

Pendana naye. [If someone doesn't love you leave them alone. Go for the one who loves you.]

He also exposes Harmonize's cheating wife, who he claims slept with his bodyguard hence the reason why he was sacked.

Afukuzishe mwarabu. [Love is not something you can read in a book. Love made Harmonize chase away Mwarabu (Wasafi bodyguard)]

Fally Ipupa's vocals are also great and on this one, Diamond scores a 9/10.

Diamond's collabos normally do well compared to solo songs. Kenyan artistes should borrow a leaf from him and take time before rushing to do collabos with artistes they don't have a rapport with.

A good example is Willy Paul's song featuring Sauti Sol and another in which he did a collabo with Harmonize and the latest his strategic hit songs with Nandy.