'They cut my toe and a snake licked my blood,' Artiste reveals Illuminati is real 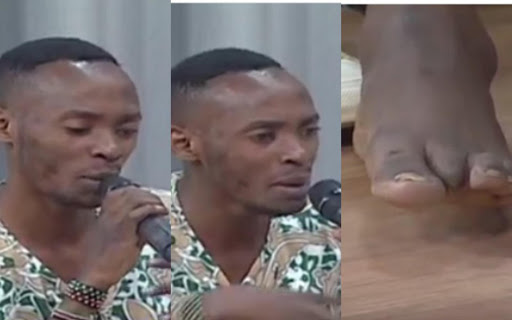 Born-again upcoming artiste Nelson Mamanda has for the first time talked about his experience serving Satan.

The 26-year-old father of one in an interview with Chipukeezy on Ebru TV narrated how he was initiated into a cult by a woman he met on his way to fetch water.

Illuminati is real, it's something that's happening but people are ignoring it. I was initiated in a cult known as Chininga when in class six. The cult had 110 people.

How did he get initiated?' Chipukeezy asked:

I was on my way to a river to fetch water after school when I met this mother who introduced me to the cult. She was dressed in a white gown, carrying a pot on her head, she greeted me and told me 'wewe ni wetu.' From that moment, things changed. I couldn't feel myself as Nelson. It was me yes but it was like we were two in one.

"I went back home but the same night, I left, I never slept at home. I found myself in the same place I had met the lady who greeted me. I still remember that day like today."

He further explained what used to happen at the shrine, saying it was not different from what we see in Nigerian movies.

We used to meet at 3 am every day for training. There was a snake that had a ring on its head. We [cult members] would lick the ring as a sign of worshipping it.

At the shrine, they would slaughter calves and chicken and other young kids and would takle it to the snake. We did this until I reached class eight. I was blinded by the cult and at one point, I even slept with one of my teachers. I was used to destruct churches. I would go to church and make sure ladies backslide.

He was later asked to give a sacrifice.

While in class 8, they told me to give a sacrifice [any part of my body]. I decided to give one of my toes. They cut it and the snake  licked the blood.

He revealed after offering the sacrifice, you become a full member (a beast).

There's a time my spirit traveled to Busia, where I've never been. I did bad things in churches there and used church ladies to confuse the church.