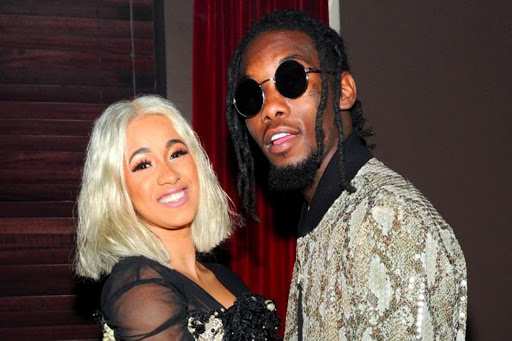 In his song "Kill Jay Z" off his 4:44 project, Hov rapped a line that I found rather peculiar. He rapped:

What he was essentially referring to was how Eric Benét used to have the hottest lass in the game when he was married to Hallè Berry. And what did the RnB singer do? He went and lost her by cheating. That sounds very familiar... Because Offest went and did the same dumb .

Cardi B welcomed baby girl Kulture Kiari Cephus into the world back in July.

And on Wednesday the Be Careful songstress' gave followers their first look at the darling four-month-old on Instagram.

Cardi's big baby reveal came just a day after she used social media to announce she and husband/father of her child Offset were calling it quits after a little over a year married.

But any heartbreak was hidden as she doted on her little girl in the photo.

Kulture looked adorable as she gazed up at her mom while wearing a custom bib, cute pink sweater and a headband with a sparkling.

Cardi surprised many when she revealed she and Migos rapper Offset ended their relationship via Instagram video Tuesday night.

In the video she told followers that the couple, who tied the knot in a private ceremony in their Atlanta bedroom in September 2017, are 'not together any more' and 'grew out of love', but remain friends and business partners.

And it seems that the rapper has good reason for leaving the Motorsport rapper.

In a text allegedly from the Migos rapper, he is seen asking one woman, Summer Bunni, to arrange a night with her and another female rapper, Cuban Doll.

The texts from June 28 were published on Instagram by a third woman, who tagged Cardi B in the screenshot.

A second image showed Summer Bunni in a limo, seemingly Facetiming with Offset.

In the messages, the sender, named as Offset, states:

I want u and Cuban can u make that happen

The recipient, named as Summer Bunni, replies that she is willing, but the other woman is unavailable on that day.

Offset suggests the following day and offers to fly the women to Atlanta to join him.

Wednesday Bunni shared a tear-filled video with TMZ, where she opened up about how guilty she felt for her involvement in the split.

She also insists that she hadn't hooked up with Offset since the birth of Kulture in July and that she didn't know 'how serious [their] marriage was.'

Bunni also offered an apology in the form on an Instagram note, where she wrote: 'Seeing another woman's pain does not bring me any joy, nor do I think it's funny. I've always been for women supporting each other but in this situation... I have failed.

Cardi and Offset enjoyed a whirlwind romance, with Cardi and Offset, who is one-third of the hip-hop group Migos, sparking up their romance in early 2017.