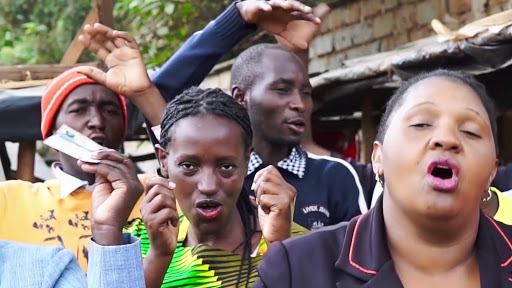 Jimmy Gait  made the comeback of the century with his new single dubbed Love. He dropped the new single at a colorful media dinner at the After 40 Hotel on Wednesday the 17.

While speaking to members of the press he said.

"I don't hold any grudges to people who ridicule or try to bring me down I just payback that negativity with positivity. I am an ambassador of hope and I lead by example by always keeping my head up no matter what I go through. "

Despite being mocked on social media he seems unfazed and even uses the memes  on his video and even mentions the ridiculous song titles suggested by Kenyans On Twitter like "Kwa Mungu Hakuna Nominations" and "Maombi Ina Work Work" among many others.

It is very clear Jimmy Gait is using the bricks thrown at him to build his empire. He says clearly in the song, "he just wants to give us social media love unlike the criticism he has been receiving".

The song has actually received lots of love from his fans who are appreciating his response.

Willys favorite: Kidogo kidogo utaskia Yesu Hatoi tint???????????????? LOVE U JIMMY✔✔
Moses Kariuki Wainaina: Big love to Jimmy, you are such an inspiration to me, you take up the stones thrown at you and use them as building material to achieve even better... #Love mob Jimmy. You inspire me "Make it or Make it"...Tell them they criticise you but instead it builds you.
Francis Kimani: Make it or make it for sure. This is the best.
Cecil Ndungu: Kill them with love no matter what they say about you.

Eric Mwangi wrote, "Listening to this song, I got to realize these memes on social media affected him negatively. I am done trolling him."