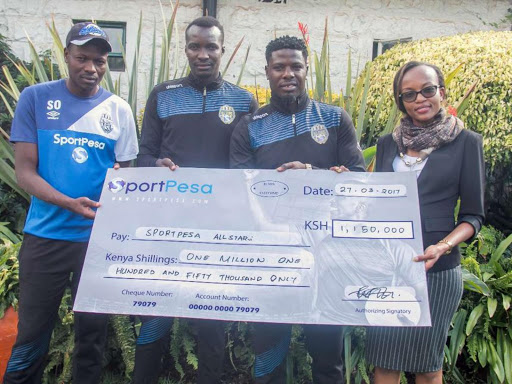 In the aftermath of the successful outing against English Premier League side Hull City on Monday 27th February, the SportPesa AllStars team was on Monday 27th March awarded with a Kshs 1.15 million cheque for the exploits in the game.

In addition to the team award, SportPesa Premier League (SPL) champions’ midfielder Humphrey Mieno, who scored the only goal in the game as AllStars lost 1 – 2 picked his Kshs 100,000 cheque for the goal as promised.

Ahead of departure to Hull City, the team was promised Kshs 1.15m for a win but after a good display despite the loss, the SportPesa management felt it wise to award the team the whole promised amount, which means each player will take home Kshs 50,000.

The side’s team manager and former Kenyan International Neville Pudo indicated said the initiative by SportPesa is well on course and will increase Kenya’s chances of qualifying for the 2022 Qatar Fifa World Cup.