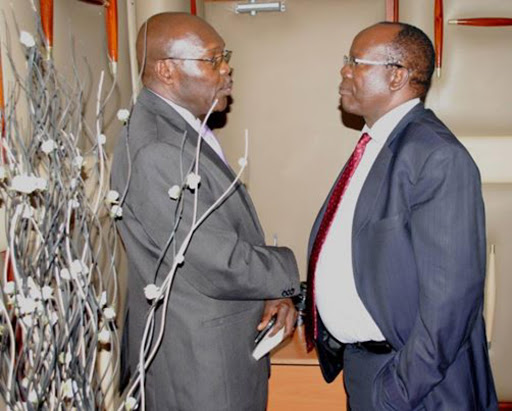 Gor Mahia chairman Ambrose Rachier has insisted his club is firmly committed to playing in the Kenyan Premier League amid reports suggesting Gor Mahia and AFC Leopards had requested to be included in the newly formed FKF league.

Yesterday it was reported the both had agreed to join the new league as FKF President unveiled the 14 clubs that will take part in the FKF League.

However Rachier has described the statement as act of desperation from FKF President Sammy Nyamweya.

“Those are acts of desperation, kicks of a dying horse, take it from me, Gor Mahia is in the KPL league.” He said.

‘It’s desperate attempt, Sammy Nyamweya is a desperate man, the four teams he promoted have now played against each other, who is going to play now in the league, if he promoted 14 teams, let those teams play in his league.” He added.

The two sides severed ties weeks ago after they failed to agree on the new league format.

Rachier also confirmed they have already received the court order barring KPL from running any parallel league in the country and they will be moving to court to challenge the order.

Yesterday KPL CEO Jack Oguda confirmed the League will not proceed until advised otherwise by the high court.

“There is a sports tribunal that is set internally to handle sports matters before moving to High court” The City lawyer said.

“If you can remember, the whole mischief that sports act was trying to cater for, was the issue where two Federations or individuals are in crisis, they used to run court and so to mitigate the situation, a tribunal was appointed to handle such matters” She added.

According to Kawira, the High Court should be the last option for both parties. Kawira says the High court will refer both KPL and FKF to Sports tribunal since the Sports act law is already in place.

Kawira who was part of the team that came up with the sports act says the high court is not allowed to listen to such cases unless it’s an appeal.

“Any judge who has read the law will refer both parties to Sports tribunal, the Sports act states that all cases should start from tribunal before moving to the High Court, the law is already in place” she said.

Kawira says FKF should have have followed proper channels based on the sports act before moving to the High.

“My question would be why they decide to go the high court without first exhausting the options that are available in the sports act” she said.

Yesterday KPL players gave both KPL and FKF a one week ultimatum to solve their wrangles or they will they call for mass protest from all footballers across the country.