A woman who suffered shocking swelling of the lips after using CoverGirl lipstick has taken to social media to warn others about possible allergic reactions.

Lily Cleopatra Maurice of Orlando, Florida, recently went to Walmart and picked up a lipstick from the CoverGirl Queen Collection. But after applying it one day and later going to sleep, Lily woke up the next morning in incredible discomfort.

‘Please be aware of the queen collection CoverGirl lipstick,’ Lily later wrote on Facebook. ‘Purchased [lipstick] this week woke up choking with huge swollen lips. I had to be rushed to the ER! Could’ve died in my sleep.’

Along with her panicked post, Lily included a series of photos showing herself looking into the camera distressed in a hospital bed and showing off a terribly swollen bottom lip.

Looking at the images it seems that it was only Lily’s bottom lip that was largely affected, and she also posed in one image alongside the offending lipstick she claims caused her lip to swell.

‘Pls be careful with the harmful products in lipsticks, [sic]’ she added in her post, replying to one user in the comments that the doctor told her ‘it could’ve been fatal’ if she had been a heavier sleeper.

Since being posted on Saturday, Lily’s post and photos has been shared more than 56,000 times. 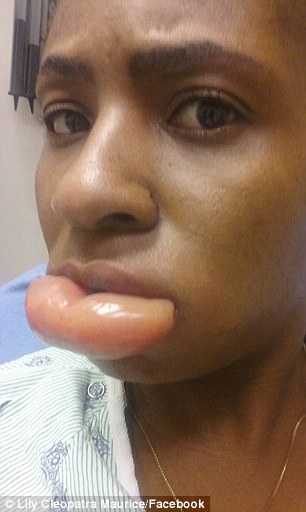 WATCH THE VIDEO ON NEXT PAGE

Cheers Baba! Types of men who drive these car models

Mnajijua! Here are the types of women you’ll find in every Kenyan church

Wife narrates how Pastor Nganga called cops on her when she...