• Wanjala is already in remand awaiting the mention of his murder case on Friday, January 27.

• On October 1, last year, hours before the arson attack Wanja claims Wanjala had sent him a message threatening to torch their home 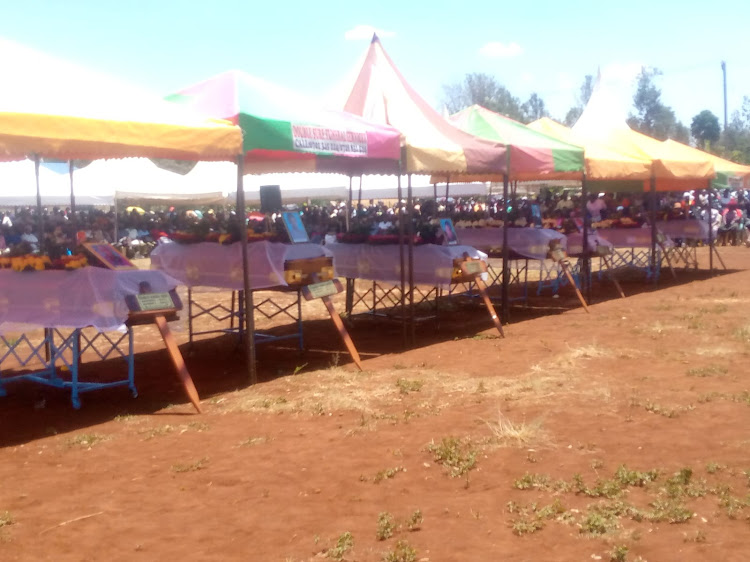 AFTERMATH: The burial of the seven family members who died after their house was burned down in 2022..
Image: BENJAMIN NYAGA

In October 2, last year, a man razed a home in Ngimari village in Embu county killing seven people in an attack that left residents in both grief and shock.

The suspect Boaz Wanjala has since been arrested and charged with the murder of Charles Kariuki, 50, his wife Catherine Wanjiru, 46, and their three children Joel Njeru, Judy Wanjiku and Maryanne Murugi.

Also killed during the arson attack that reduced Kariuki's timber house to ashes were his two grandchildren Tumaini Blessings and Prince Baraka.

His daughter Maryanne was preparing to sit the Kenya Certificate of Primary Education exam in November.

Wanjala is already in remand awaiting the mention of his murder case on Friday, January 27.

The Star found Wanjala's estranged wife Tabitha Wanja, a mother of three disclosed that she had been married to Wanjala for seven years since 2015 only for them to part ways in 2021 after disagreements.

Speaking at their Ngimari home in Runyenjes, Wanja said Wanjala stole their two children from her in 2021 at their home without her knowledge months after she left her matrimonial home in Kakamega.

"We had parted ways after he became violent and forced me back to my village. One day he came home pretending to have come for a visit but only to sneak out with our two children," Wanja told the Star.

She said her efforts to get her children back were in vain. She then settled into another marriage and got a baby.

"He (Wanjala) got the news that I had gotten a baby with my new husband and started sending me threatening messages. He vowed to lynch me and my new husband," Wanja said.

On October 1, last year, hours before the arson attack Wanja claims Wanjala had sent him a message threatening to torch their home. That was on a Saturday.

"On Sunday morning when we woke up, we found my neighbour's house reduced to ashes. It left me shaking," Wanja said.

Minutes later, she got another text from Wanjala. "He was asking why I was still alive. I knew he had done something sinister."

Wanja said she reported the matter to police.

Detectives who probed the matter found that the suspect had disagreed with his wife, who fled their matrimonial home in Kakamega only to be married by another man in Embu.

They had two children. After learning that the woman had remarried, the suspect allegedly sent a text message, threatening to set their family home on fire.

Wanja believes Wanjala was targeting their home when he mistakenly torched Kariuki's house.

Wanjala wanted to burn his estranged wife alongside her new husband in their house which was some 500 metres away from Kariuki's home.

Tragedy as Kisii bar goes up in flames

The cause of the fire is yet to be established.
Entertainment
1 week ago

Police visited the scene and helped to move the bodies to the mortuary.
News
1 month ago