Mwangi's body was discovered in Kieni forest wrapped in a black polythene under a heap of cartons and empty bags of cement.

•  The late Paul Mwangi was married to Kiambu politician Gladys Chania and the two had 3 children together.

• Gladys is the prime suspect in the murder. 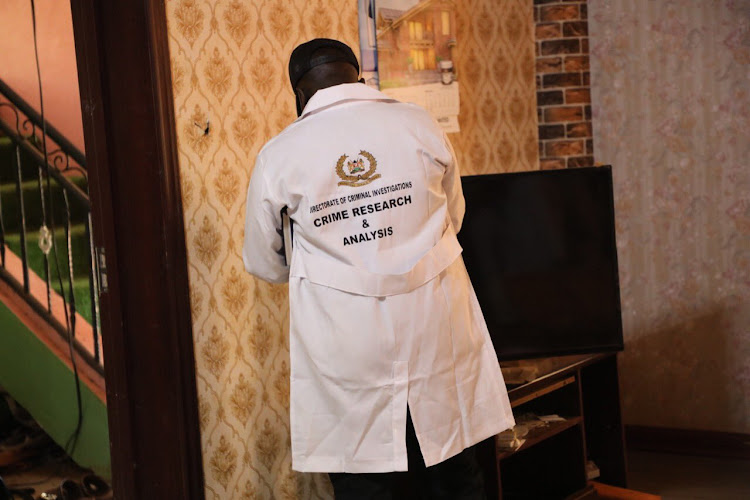 The autopsy of the the late George Mwangi has revealed that the Kiambu-based businessman revealed died of blunt-force trauma to the head.

This according to an exercise performed by government pathologist Johansen Oduor, which revealed that the late Mwangi was hit severely on the head by a blunt object.

Members of family related to the late recounted that injuries on his body showed he met his death in a terrible manner with injuries on his fingers, which might suggest Mwangi went down swinging.

"Pieces of blood stained metal rods, blood soaked bed sheets, stained curtains and clothing were part of the exhibits that were recovered in the house by the sleuths based at the DCI National Forensic Laboratory."

"Detectives based at the Crime Research and Intelligence Bureau, Homicide Department, Forensic Crime Scene and Photographic units have concluded that he was murdered in his bedroom on the top floor," DCI stated then.

The late Mwangi will be buried after two different parties agree on a date as they are battling for the burial rights.

Meanwhile the late Mwangi's wife is still in custody and is considered the prime suspect in the murder.

The Directorate of Criminal Investigations said that Chania is believed to have mooted the murder plan after she learnt about her husband's alleged love affair with a secretary at a local school.

Mwangi, 58, was a contractor based in Rwanda and had arrived in the country on September 13.

Chania is suspected to have colluded in executing his murder with a new employee and other accomplices.

The couple had been married for 20 years with three children.

"However, according to multiple sources, their union seemed to have been undergoing turbulent times since the woman would mostly spend her time at their Thika home while Mwangi would stay at the splendid five-bedroomed Mang’u residence whenever he was in the country," DCI said.

The DCI revealed that the alleged affair begun shortly after the woman met Mwangi while house-hunting for a rental apartment. He offered her one of his rentals next to his house.

The alleged affair was reportedly not a secret as the two spent a lot of time together whenever Mwangi was in the country.

DCI said they would be spotted at local entertainment joints and other social gatherings.

"Some of the family members intimated to detectives that the deceased had introduced the woman to his family as his second wife and she was well known to the extended family," DCI stated.

On the day Mwangi was murdered, he had attended a family function in Kimunyu accompanied by his love interest. Chania also attended the event.

Witnesses said the alleged lover was on the driver’s wheel of Mwangi's double cabin truck and after the function, they headed back to Mang’u. Chania had left earlier and was in the house when the two arrived.

That was the last time Mwangi was seen alive until the discovery of his body on Wednesday in Kieni forest by workers at the Kiamunyeki tea plantation.

Mwangi's alleged lover told detectives that they had agreed to go on a date the following day but when he failed to call her at the agreed time, she called two of his friends to call him on her behalf.

Chania told detectives that her late husband left the house on Sunday at 10am on foot and left behind his mobile phone and never returned.

This prompted her to file a missing person’s report at Mwea Police post on Tuesday, September 11 at 8pm.

However, that same day, witnesses reported to have seen a woman driving Mwangi's vehicle towards Kiamunyaka centre where the vehicle developed a flat tyre and was fixed.

The mechanic who fixed the puncture said the woman asked for directions to Naivasha.

The witness said she flagged the vehicle down to warn the driver that the luggage was in danger of falling off but the truck sped off towards Kieni forest.

The body was discover in the forest the following day wrapped in a black polythene under a heap of cartons and empty bags of cement.

Detectives believe that the suspect placed a call to make a missing person's report after dumping the body.

The investigating detectives also learnt that Chania had hired a new employee, Morris Kamau, on the eve of the murder after a John Mwangi, who had worked for her for four years allegedly failed to return home after he was sent to deposit money on Mpesa. His whereabouts still remain unknown.

Kamau, who is also a suspect in the murder, told detectives that on the day Mwangi's  body was discovered, he had been asked by Chania to assist her carry a heavy load that was destined for the airport to the back cabin of the truck.

When detectives arrested Chania on Thursday evening, she was driving the same truck that was spotted heading towards Kieni forest.

Preliminary examination of the truck revealed blood stains on the floor of the cabin, manila ropes and empty cement bags similar to those found covering the body at the scene.

Kenyan singer Avril is mourning her legendary boxer grandfather Phillip Waruinge (1945-2022) who passed away in his sleep.
News
1 month ago