Musyoka was killed because of Embakasi East race-Mureithi

He addressed mourners during Musyoka’s burial ceremony at his home

• Mureithi said the deceased’s children should not suffer while those of his killers are enjoying life.

• He addressed mourners during Musyoka’s burial ceremony at his home in Muuani village, Mwala, Machakos County on Friday. 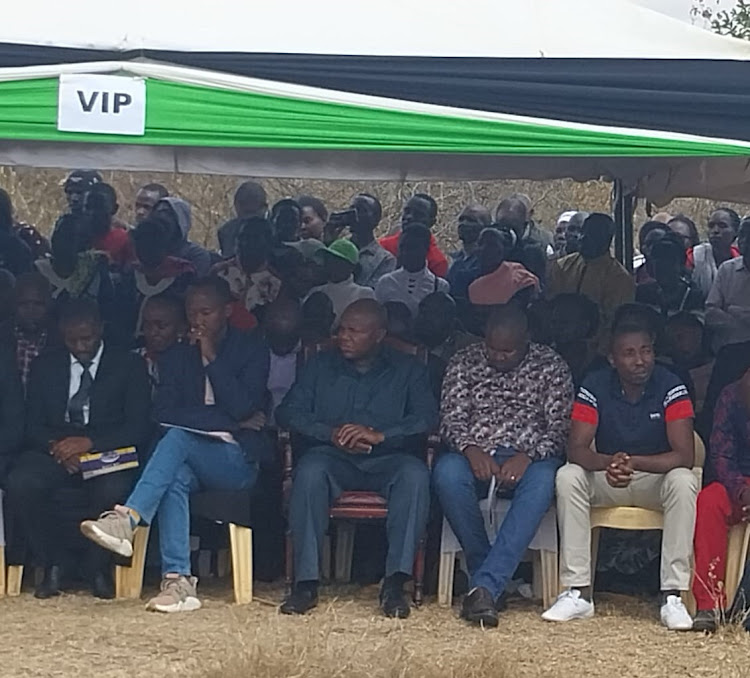 Losing Embakasi East MP aspirant Francis Mureithi (R) with Ukambani leaders during IEBC official Daniel Musyoka's burial at his rural home in Muuani village in Mwala, Machakos County on Friday, August 26, 2022. The aspirant who lost the Embakasi East seat has said that the race in Embakasi was what caused the death of the IEBC official
Image: George Owiti

Francis Mureithi, one of the losing aspirants for the Embakasi East MP seat has demanded immediate action from investigating authorities regarding the death of Embakasi East Returning officer Daniel Musyoka.

Mureithi said the deceased’s children should not suffer while those of his killers are enjoying life.

“I’m saying while here at Musyoka’s home today. Because Musyoka couldn’t take bribes from anyone, he wasn’t biased in his job. Those who murdered him if not arrested, I will from next week lead demonstrations in Nairobi to send someone home,” Mureithi said.

He addressed mourners during Musyoka’s burial ceremony at his home in Muuani village, Mwala, Machakos County on Friday.

Mureithi maintained that Musyoka was murdered because of the Embakasi East parliamentary seat.

“Mr. Musyoka was my returning officer. I was one of the contestants for the Embakasi East parliamentary seat. I’m sure most of the IEBC officials in the constituency who are here can attest it is their first time to see me today since I wasn’t giving them pressure or telling them to help me. I believed in their work,” he said.

“I want to confirm here, Musyoka, just the way the church has said here, was straightforward. Since I became a candidate, we have never met. He used to call me on phone; 'Mureithi if you aren’t coming to the office, send someone.' And if I send, he used to serve me accordingly,” Mureithi explained.

“I remember calling him on the poll day, August 9. He asked whether I was ok, I said yes I was ok and he said, 'Let the election exercise continue and let the person who will win win.' I know Musyoka even while resting here today wants Mureithi to fight for him.”

He said all IEBC employees should have life insurance covers so that while applying for the electoral body’s job, they don’t get afraid of anything.

“You can work anywhere knowing that you will do the job and go home alive. There is nobody who should die because of politics,” Mureithi said.

Mureithi claimed that Musyoka had ordered some nine ballot boxes at the Embakasi East polling centre not to be opened.

The MP aspirant said the returning officer was to open them himself, but were later opened after his disappearance. He went missing before announcing any election results.

“He wanted justice, they lured him. He left the tallying centre and they did what they did. IEBC you have powers, you can suspend gazettement of Embakasi election results until Musyoka’s killers are found and charged,” he said.

Wafula Chebukati has allegedly removed all the other commissioners from the commission's WhatsApp group.
Politics
5 months ago

Juliana Cherera, the Independent Electoral and Boundaries Commission vice chair has filed a response to the presidential election petition
Politics
5 months ago

The body of Musyoka Mbolu was identified by his sisters Mary Mwikali and Ann Mboya at Loitokitok sub-county mortuary.
Entertainment
5 months ago
WATCH: For the latest videos on entertainment stories